With 1,050 hp at my disposal, the only sounds I hear are the whirr of electric motors, the occasional thrum of tires over rough pavement, and the drumbeat of my racing heart as I try to keep pace with the Stig on the twisty Skyline Drive in the San Francisco hills. Yeah, that Stig, racer and former “Top Gear” hotshoe Ben Collins. The prodigious power of the 2022 Lucid Air Grand Touring Performance helps me keep up with blasts of acceleration between corners, and I’m learning that I can keep up in the corners as well.

I’m reluctant at first. Throwing a car that weighs more than two and a half tons into a tight corner can be a recipe for disaster, especially on tires made for low rolling resistance. However, with its low-set stance, the Air Grand Touring Performance feels serene. In each turn, the front end seems particularly well tied together as the nose responds immediately to the quick-ratio 13:1 power steering.

The Air just delivers in the corners, and that builds my confidence. I can feel the weight shift as I enter each turn, and the body lean with it, but then the car takes a set, the 245/35/R21 front and 265/35R21 Pirelli P Zero summer tires dig in for traction, and the damn thing just carves a true line. No understeer, no oversteer, no bobbling, it just goes where I point it. With its full-size proportions, it would likely be a lot to handle on a tight autocross, but on mountain or canyon roads, it’s a champ. 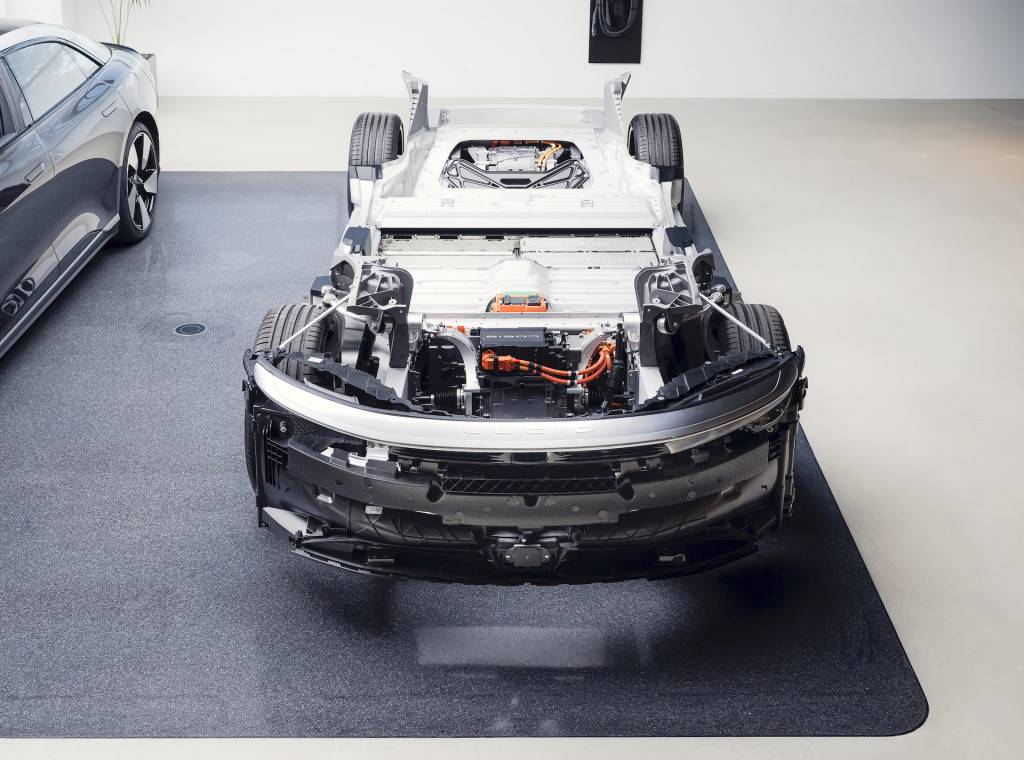 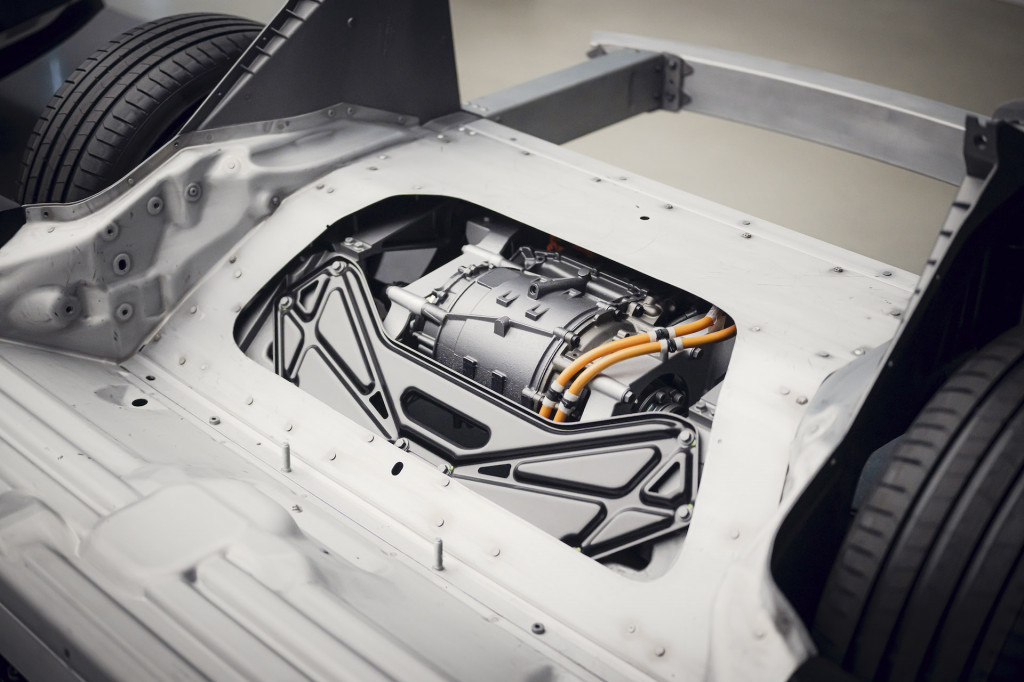 The platform helps, too. The 2022 Lucid Air sits on a skateboard architecture with 22 battery modules set low into the floor. Each battery module is rigid in its own right, and they all come together to make the floor a stiff structural element. In the Performance version, they combine for 118 kwh of electric energy storage, while the standard Grand Touring has 112 kwh. That’s not usable space, either. Lucid uses the full capability of its battery packs.

The battery also contributes significantly to the car’s 5,236-lb curb weight. While that’s heavy for a sedan, it’s fairly light for an EV. The comparably sized Mercedes-Benz EQS 580 weighs almost 5,900 lb with about half the power. To achieve some of these weight savings, Lucid makes the body from aluminum and uses trick engineering to create smaller, lighter powertrain components. Comprised of a rotor, stator, inverter, and differential, each electric motor weighs 163 lb, 40 less than the motors in the Tesla Model S.

Each motor can also produce up to 670 hp, and the Air Grand Touring and Grand Touring Performance have one on each axle. In the Performance version, they’re tuned to produce 1,050 hp, 61 less than the Air Dream Edition that the company wanted to keep special for its first 520 customers. It also makes 921 lb-ft of torque. The Grand Touring model spins up “only” 819 hp and 885 lb-ft. 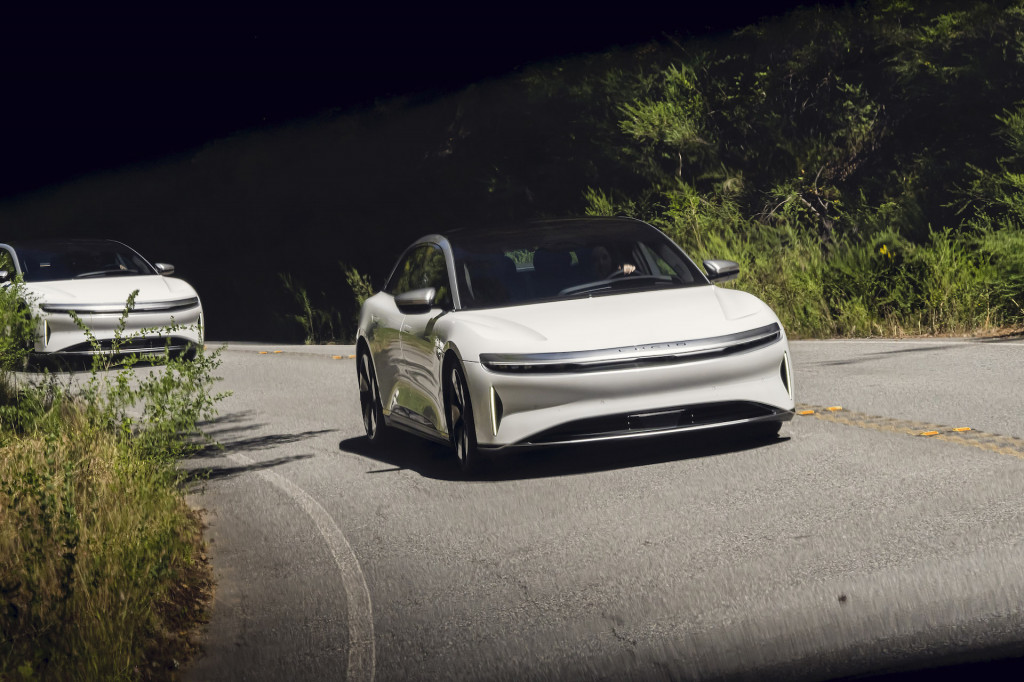 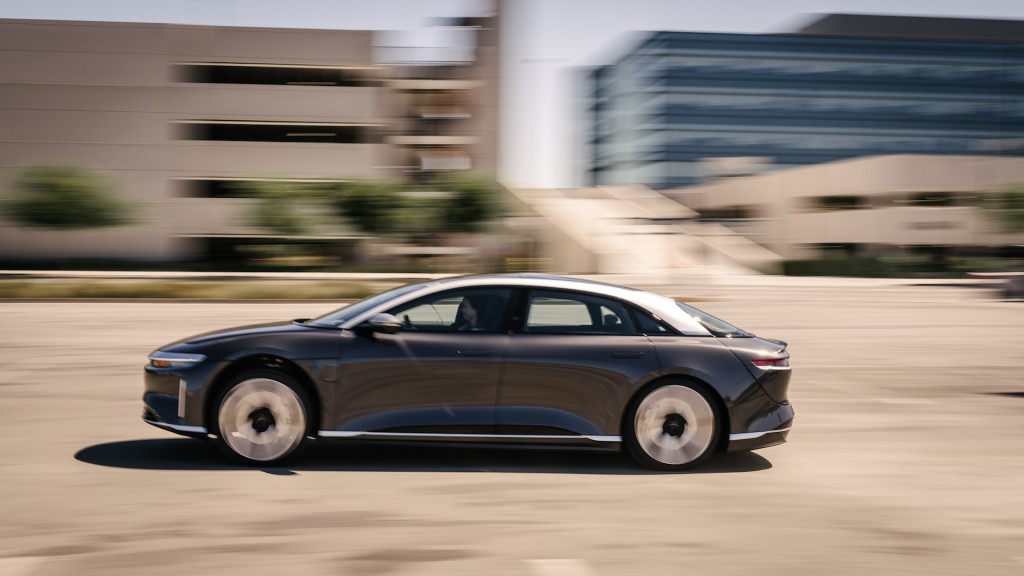 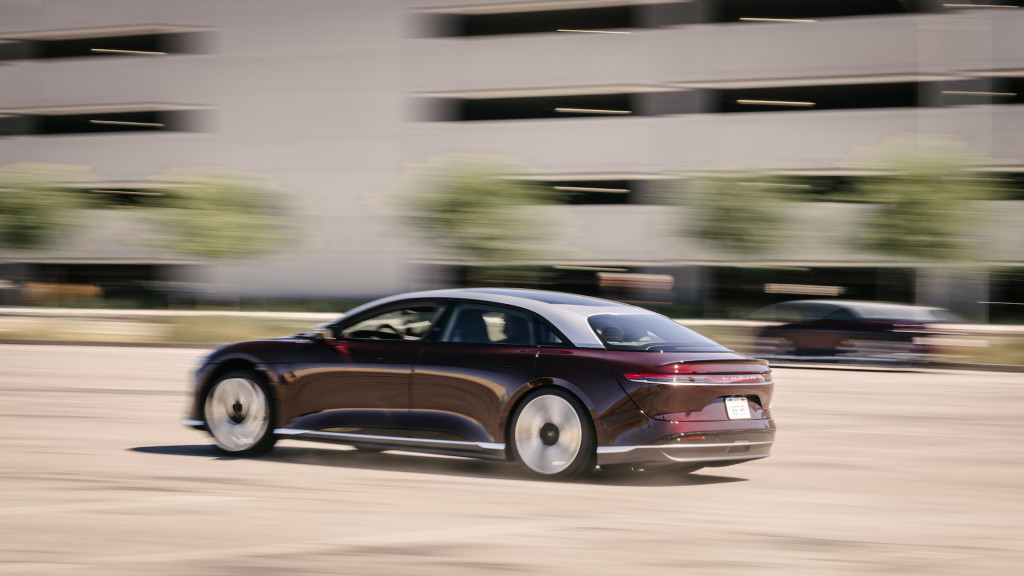 Both provide a rush of silly power. It’s hard to tell them apart because flooring the throttle creates such violent acceleration in each. The difference? Zero to 60 mph in 2.6 seconds in the Performance and 3.0 seconds in the standard Grand Touring. Both can reach 168 mph, and the Grand Touring Performance can cover the quarter mile in 10.1 seconds compared to 10.7 seconds for the GT. Those are supercar numbers.

The Air’s power is part of a new surge of electric power pioneered by Tesla and adopted by Rivian, Rimac, and others. The four-figure horsepower is an order of magnitude higher than the already overpowered Hellcats, GT500s, AMGs, Ms that have taken the internal combustion engine to new highs.

Compared to those cars, the Air’s brand of electric power is both less and more thrilling. The bellow and grunt of churning pistons, which can be so intoxicating when tuned correctly, gives way to a faint whirr. However, the immediacy of the power and the relentlessness of the acceleration eclipse anything with a gas engine outside of a Bugatti or a handful of other cars from boutique exotics.

Full horsepower is only available in the top Sprint mode, while Smooth and Swift modes are limited to a measly 784 hp. I’m chasing the Stig in Sprint mode with the brake regeneration set to High rather than standard. The combination allows for mostly one-pedal driving that adds an element of finesse to the experience. The crazy power available at anything near full throttle means I can go as fast as I dare from corner to corner. The High regen applies 0.3 g of braking force when I let off the throttle, which lets me slow the car without having to move a foot to the brake pedal. It also lets me balance the car’s weight mid-corner with only the throttle. I can add a little maintenance throttle after turn-in and before the apex to maintain momentum or I can let off and use regen to provide trail braking to keep the nose down and help carve the turn. Honing that control can only help improve the handling. 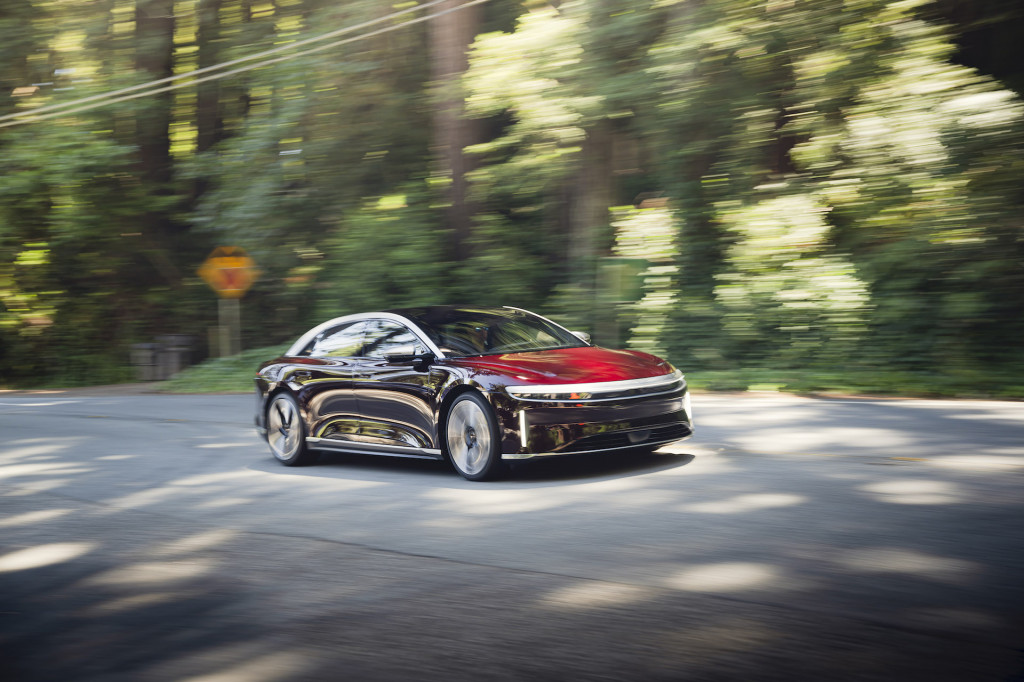 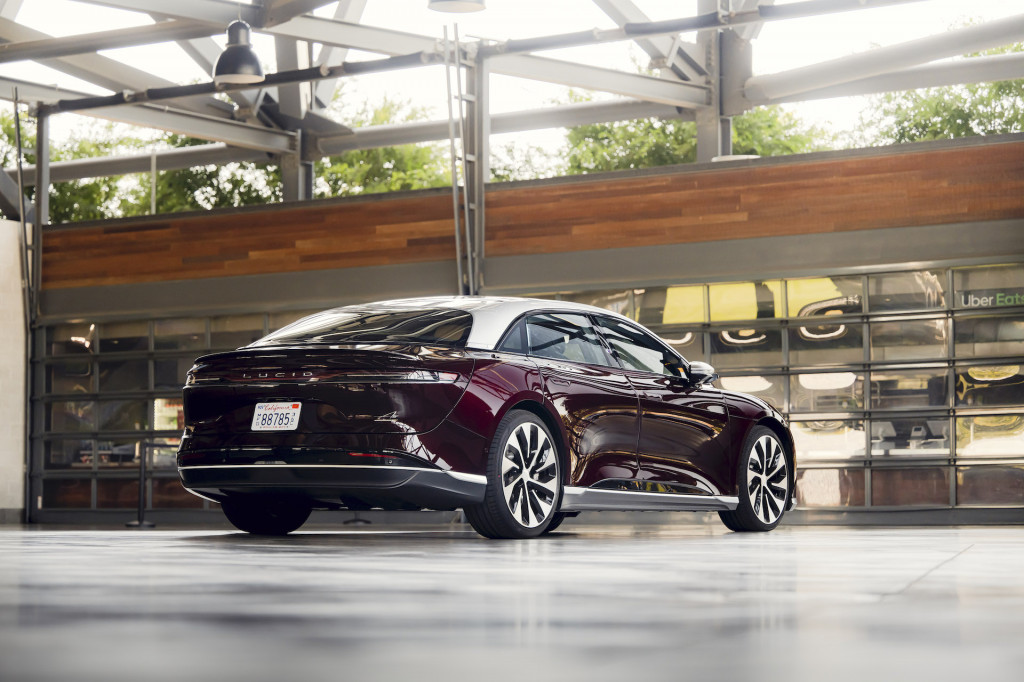 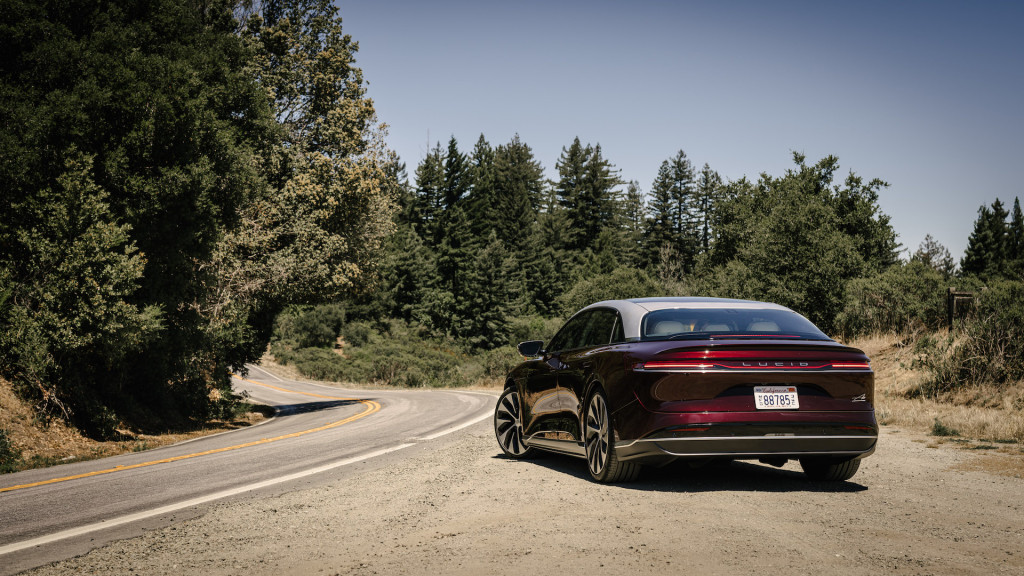 Of course, four-figure horsepower means I do need to use the friction brakes when heading into some sharper corners. Applying the brake uses just the discs and calipers, so there is no awkward blend of braking types. Lucid outfits the car with big brakes—15.0-inch front rotors with 6-piston calipers and 14.8-inch rear rotors with 4-piston calipers—and they do a good job in everyday driving, but I’d like more bite and urgency out of them when braking hard from the high speeds the Air can so easily hit.

Even in Sprint mode with the 21-inch wheels, the Air has a smooth, supple ride. The dampers cycle through three ranges based on drive mode, and they always adjust damping force to meet the conditions. The steering also adds weight based on mode.

After cycling through the modes, I prefer the heavier, more stable steering weight and stiffer damping of Swift and Sprint. Smooth mode allows a little too much bounding over bumps on the highway, and Smooth’s lighter steering weight can make it fidgety at higher speeds.

However, Smooth is the mode of choice to unlock the Air’s industry-leading efficiency.

With the standard 19s, the Air Grand Touring gets an EPA-rated range of 516 miles, which translates to an efficiency rating of 4.6 miles per kwh. Choose the optional 21s and those numbers drop to 469 miles and 4.1 mi/kwh. The figures for the Grand Touring Performance still outshine most of the competition at 446 miles and 3.8 mi/kwh.

Of course, you can’t try to match pace with the Stig and achieve those numbers. During my 85 miles in the Grand Touring Performance, I got 2.5 mi/kwh. I then switched into a Grand Touring and saw that the previous driver got 3.6 mi/kwh over the same distance, then went on to post only 2.4 mi/kwh over 36 miles of also spirited driving. Your mileage may vary, but be sure to go easy if you don’t want to waste electrons.

The Air is a leader when it’s time to replenish those electrons, too. It uses a 900-plus-volt electrical architecture that allows it to recover 300 miles in 21 minutes on a 350-kw DC fast charger at a rate of up to 300 kw. It can also charge on a 240-volt outlet at 9.6 kw or at 19.2 kw with a 100-amp Lucid home charging unit. As a plus, it offers bidirectional charging that allows it to charge other EVs. 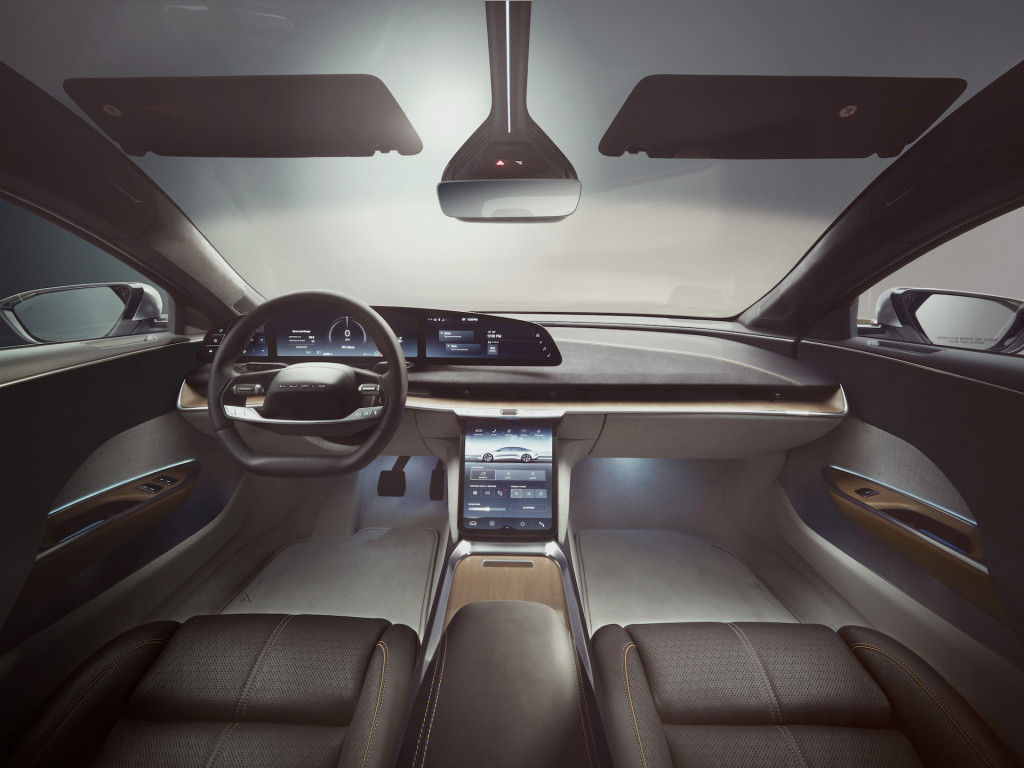 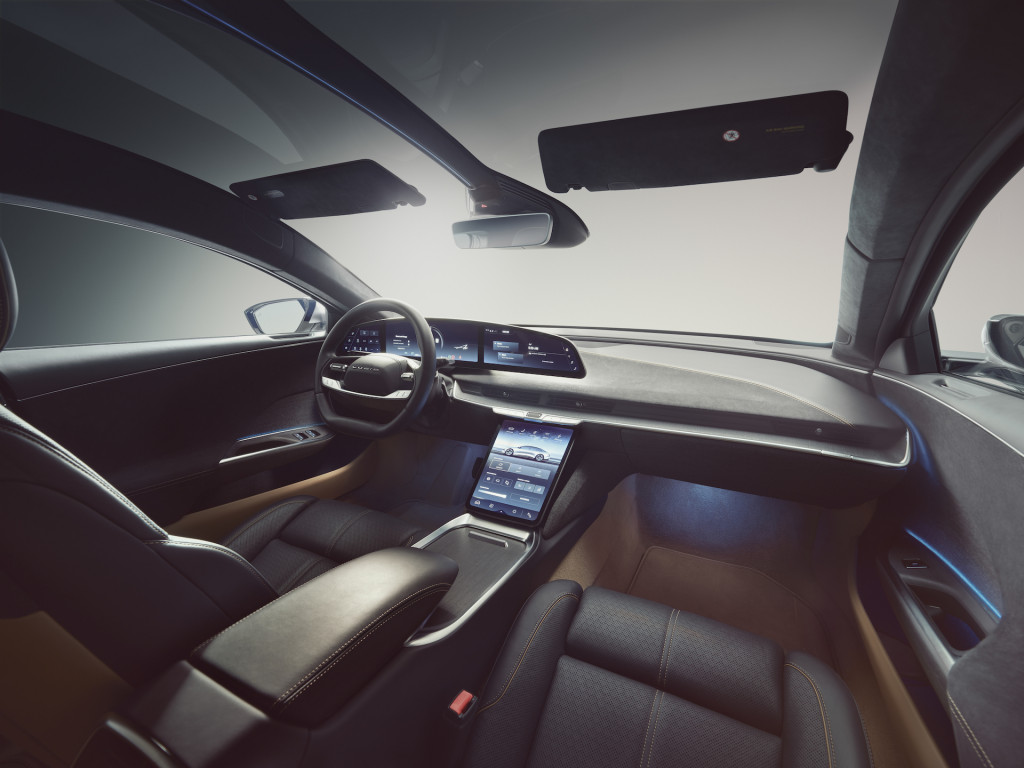 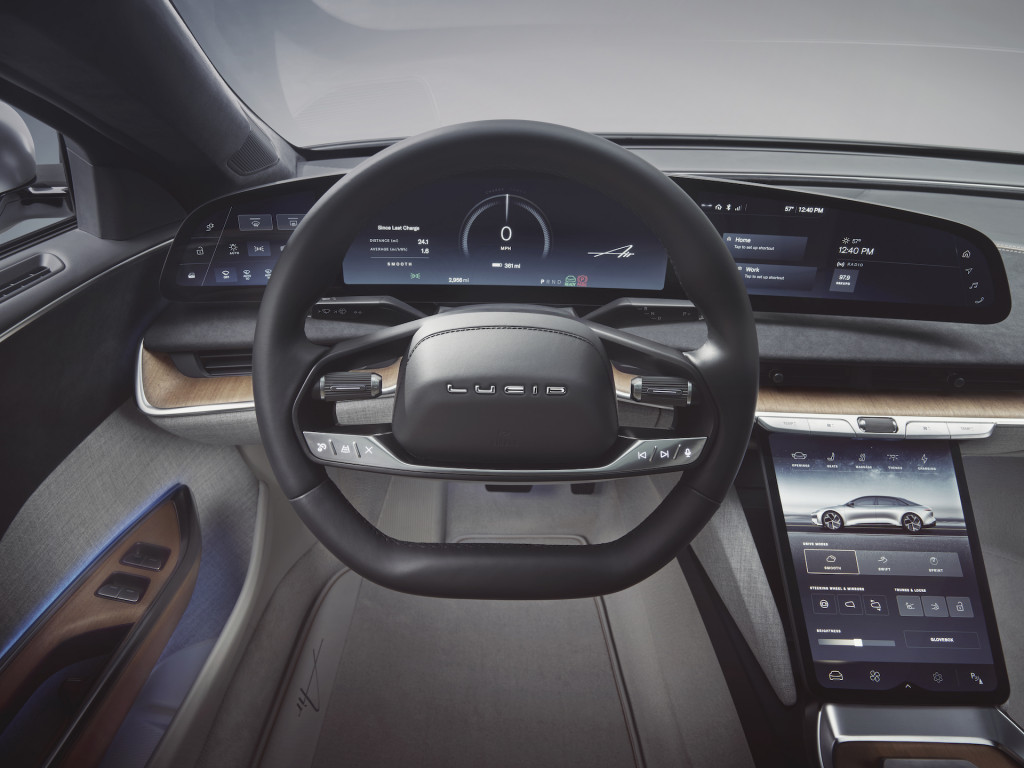 Lucid wraps the Air’s power and efficiency in a cocoon of luxury and technology. At 195.9 inches long with a 116.9-inch wheelbase, it’s a full-size sedan with plentiful room for people and packages. A sharply raked roofline makes entry and exit a headbanger’s ball, and not the music kind. Duck down enough, though, and you enter a cabin with good head and leg room front and rear, and well-bolstered front seats. The rear seat has low seat bottoms, so thigh support suffers for comfort on longer trips. An 18-pack module with 95 kwh—in upcoming Pure versions—will eliminate the modules from the rear floor to improve rear seat comfort.

The trunk is deep and large. It has a center passthrough for skis and offers 22.1 cubic feet of space, though it looks more like a drawer than a trunk because the rear glass slopes down toward the end of the car. A rather wide and deep front trunk adds another 10.0 cubic feet of cargo space to give the Air the storage space of a hatchback. 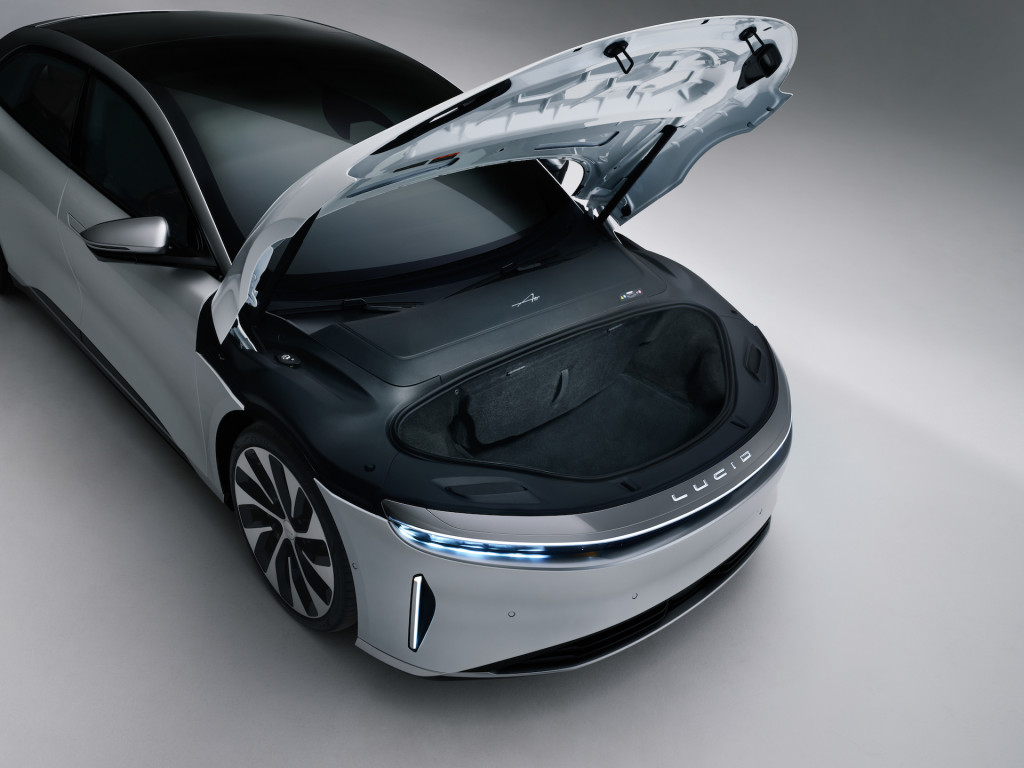 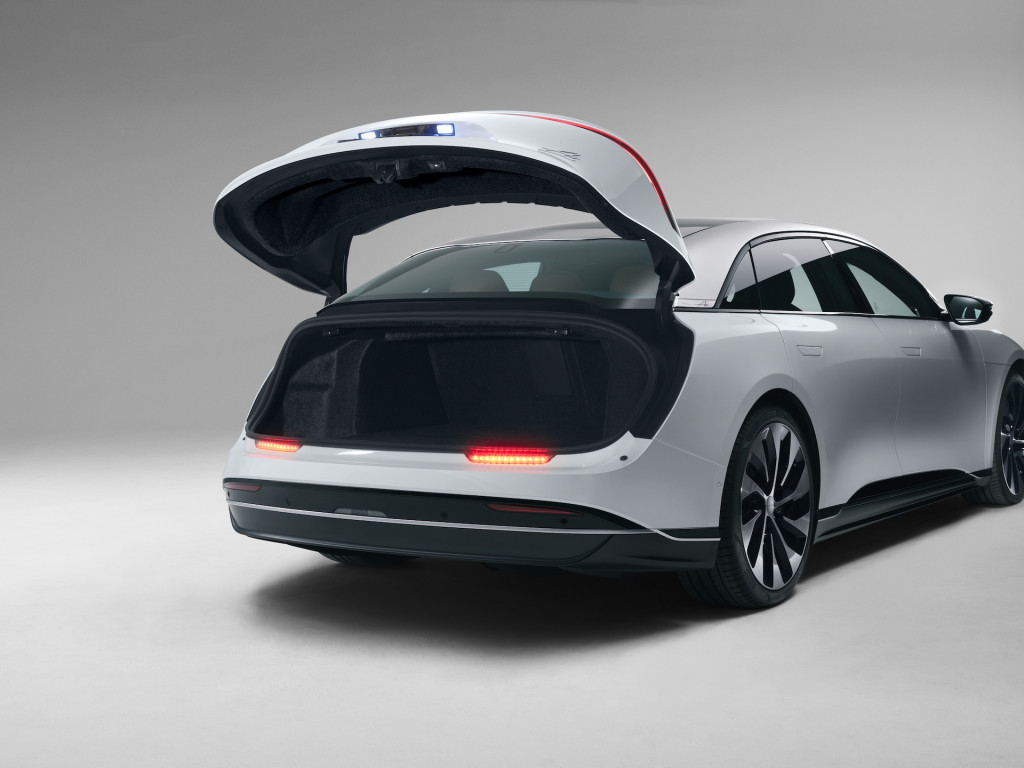 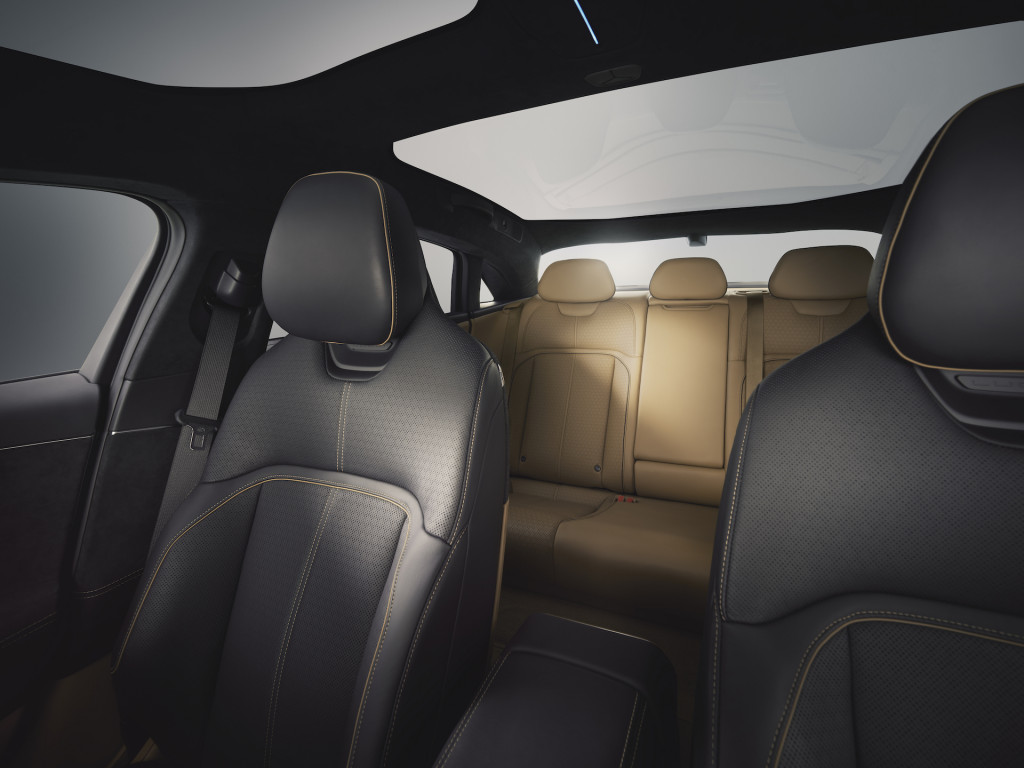 A Silicon Valley-based company, the Air embraces its California roots inside. Lucid offers four interior themes, all based on the colors of California locations at a chosen time of day. They’re called Santa Cruz, Tahoe, Mojave, and Mojave PurLuxe. They all come with a combination of leather, wood, cloth, and synthetic suede trim, except for Mojave PurLuxe, which substitutes synthetic leather for the real thing. The colors work well together, and each sill plate has the name of the interior theme and the latitude and longitude coordinates of that area. Lucid also includes its bear logo (chosen because the bear is California’s state animal) in the cabin.

The interior technology presents itself in a bank of screens. Up top is the Lucid UX 34-inch Glass Cockpit that provides three screens, one to the left of the steering wheel for assorted vehicle functions, a digital instrument cluster in front of the steering wheel, and a center touchscreen for navigation and infotainment. Below it, a large vertical screen rises with the center stack to control driving modes and sort through all kinds of vehicle settings and data. The whole system can be updated over the air, and Lucid is already working on an OTA update that moves the top touchscreen’s home, navigation, entertainment, and phone icons from the right side of the screen to the left where they will be easier to reach.

They both have a glass canopy from the windshield to the back of the roof—interrupted by a crossbar at the middle. There are power-adjustable heated and cooled front seats with massage, leather upholstery, a 21-speaker Surreal audio system, and soft-close doors. Lucid also makes its DreamDrive Pro driver-assist system standard. It uses cameras, radar, and lidar to provide automatic emergency braking, active lane control, blind-spot monitors, adaptive cruise control, and even automatic parking. 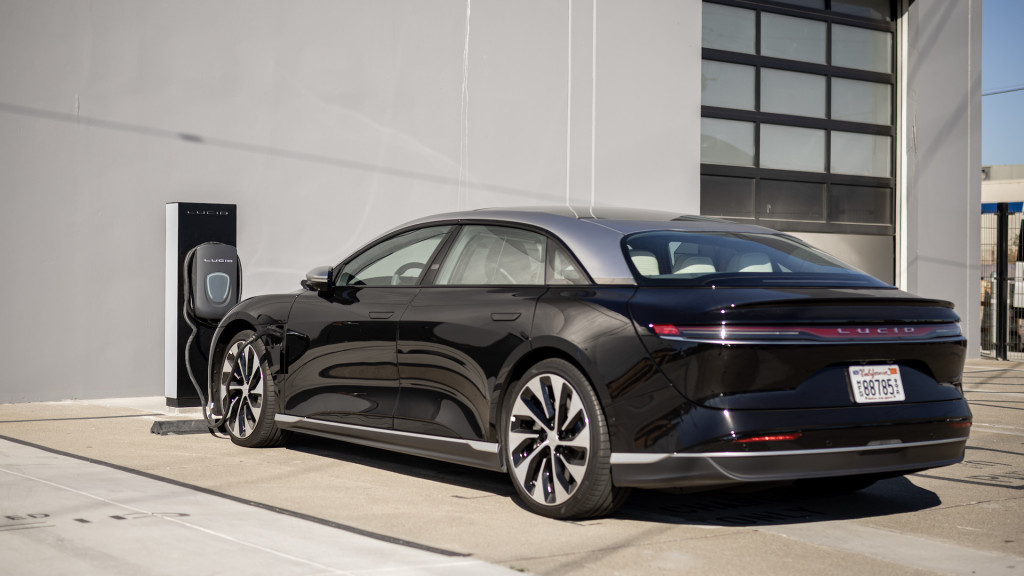 The Lucid Air Grand Touring can DC fast charge at up to 300 kw to replenish its class-leading 516-mile range.

The 2023 Lucid Air Grand Touring costs $155,500 including destination, while the Grand Touring Performance runs $181,400. Like most automakers these days those prices have been hiked even before the cars hit the market, in this case 12-13%, according to Lucid.

That’s a lot of money to spend on any car, but the Air Grand Touring and Grand Touring Performance make the case for those prices with their ungodly power, cutting edge technology, roomy and luxurious cabins, and industry-leading efficiency and range. Heck, they’re even fun choices for chasing the Stig through the California hills.

Lucid provided airfare, lodging, and access to a formerly anonymous TV icon for Motor Authority to bring you this firsthand report.