The 2023 Nissan Z only exists because of enthusiasts within the company. Back-channel dealings by sports car product chief Hiroshi Tamura and design boss Alfonso Albaisa resulted in a design beautiful enough to convince Nissan brass it was worth continuing the Z’s 53-year history. The one caveat was the new car would have to be based on the previous platform to save development costs.

That left the Z team with the challenge of making the Z35 different enough from its Z34-generation predecessor while using many of the same parts. After driving the new Z on controlled lead-follow laps on the infield course at Las Vegas Motor Speedway and on the road to Lake Mead National Park, I can say Nissan got that balance right. 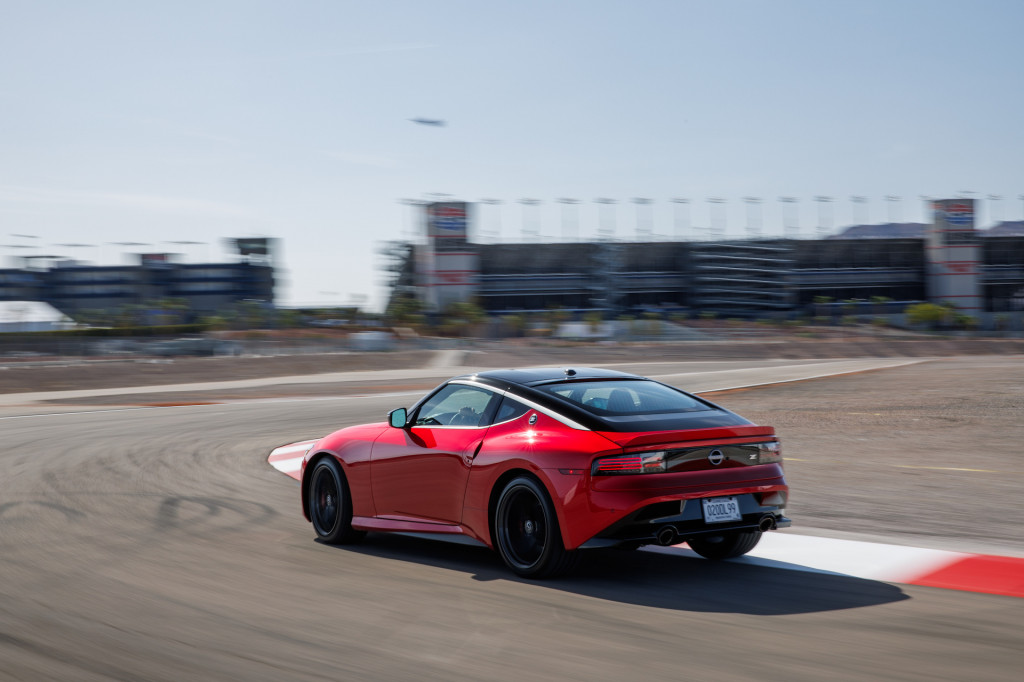 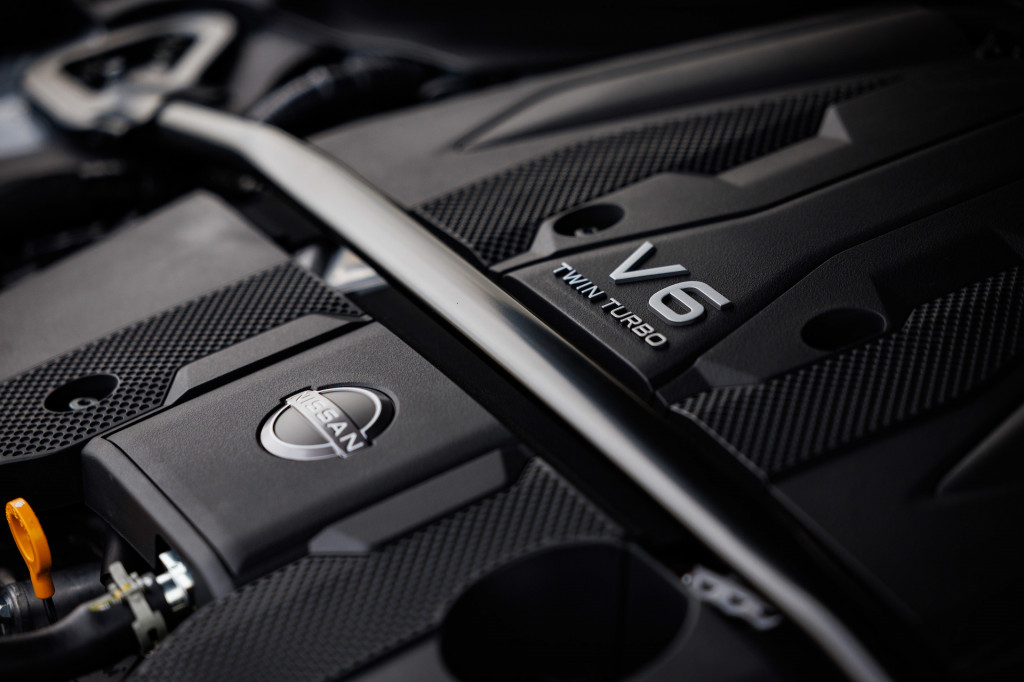 The new engine provides notably more thrust from a stop and sounds like a toned down but still spirited version of the thrum from the outgoing V-6.

A sprint exercise earlier in the day proved how much quicker the new engine makes this car than the last. Over a roughly 800-foot straight-line drag, the new Z hit 87 mph with the new 9-speed automatic transmission and 85 mph with the carry-over 6-speed manual, both using launch control, which is a first for the Z. A 370Z with the manual only managed 77 mph over the same run. That’s a sizable gap. Nissan isn’t quoting a 0-60 mph time, but it’s likely in the low-4-second range, compared to about 5.0- seconds for the naturally aspirated V-6.

I get laps in cars with both transmissions. The 9-speed shifts quickly and usually chooses the right gear for the job. However, the twin-turbo V-6 revs too slowly to provide the kick of thrust on corner exit expected in a track car. Sport mode doesn’t hold gears as long and its shifts aren’t as rapid-fire as competitors’ 8- and 10-speed automatics or dual-clutch boxes. I keep trying to grab a lower gear via the GT-R-sourced shift paddles. It’s the rev issue again. Rather than kick me in the pants, the V-6 builds speed steadily as it approaches its 6,800-rpm redline. My, how spoiled we’ve become with 500 to 700-hp sports cars. It’s not slow by any means, and you won’t feel it on the street where the need for speed isn’t so urgent.

Otherwise, the 6-speed manual is a delight. It comes standard with downshift rev matching and this year it adds no-lift upshifts. It’s teamed with a nicely weighted clutch with a natural takeup point and a shifter that slots easily from gear to gear. It also routes the power to the rear wheels through a carbon-fiber-composite driveshaft that you can brag about at Cars & Coffee. This is one of your last chances to get a manual transmission, folks. Don’t waste it. 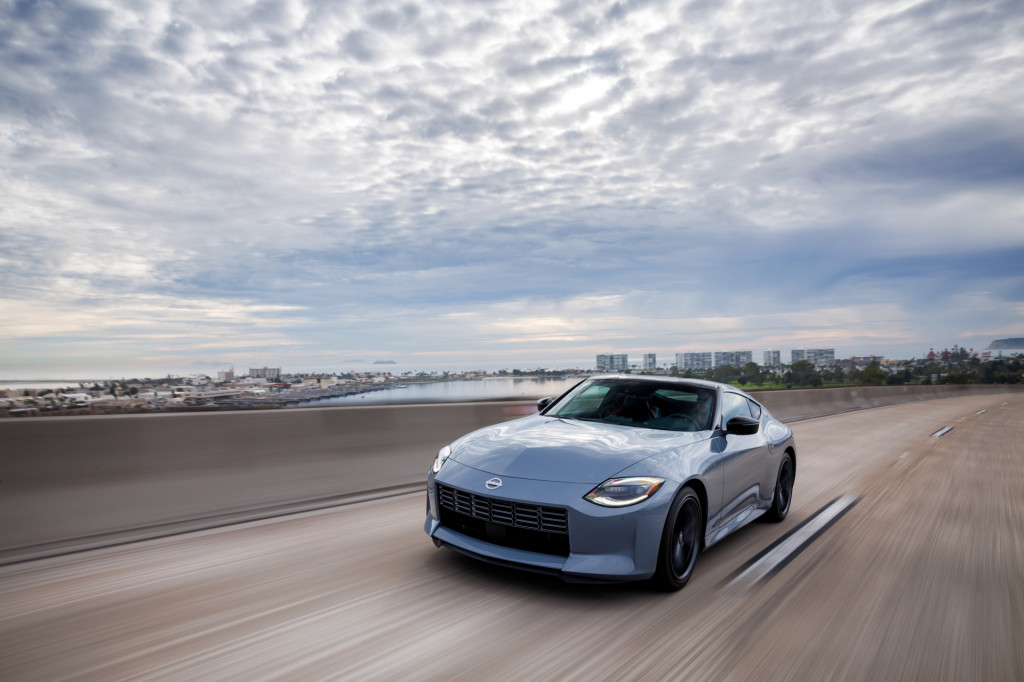 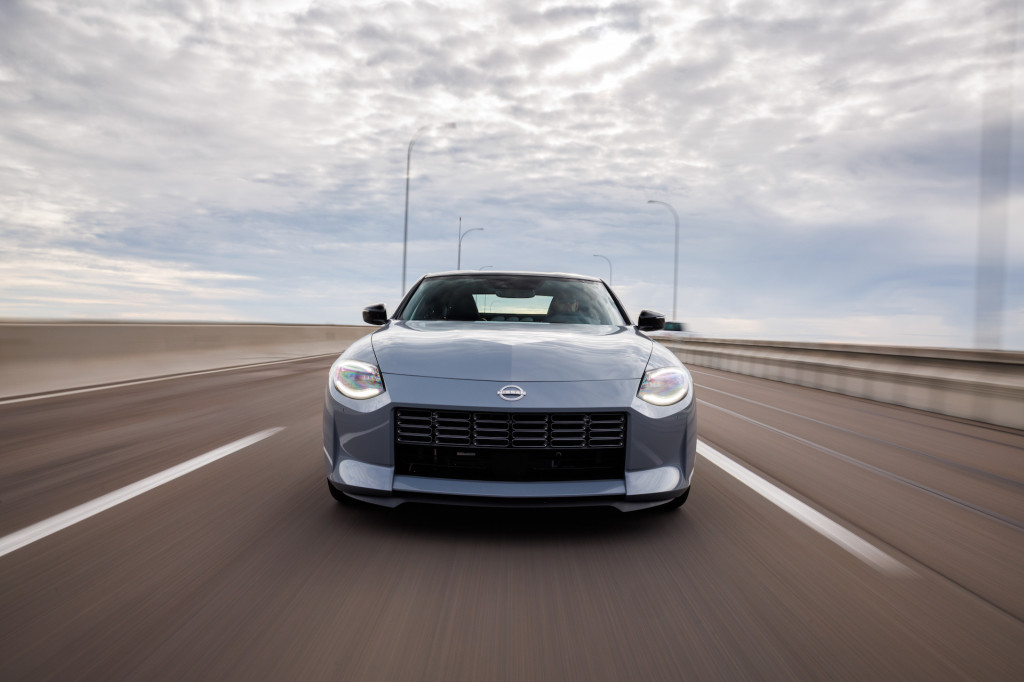 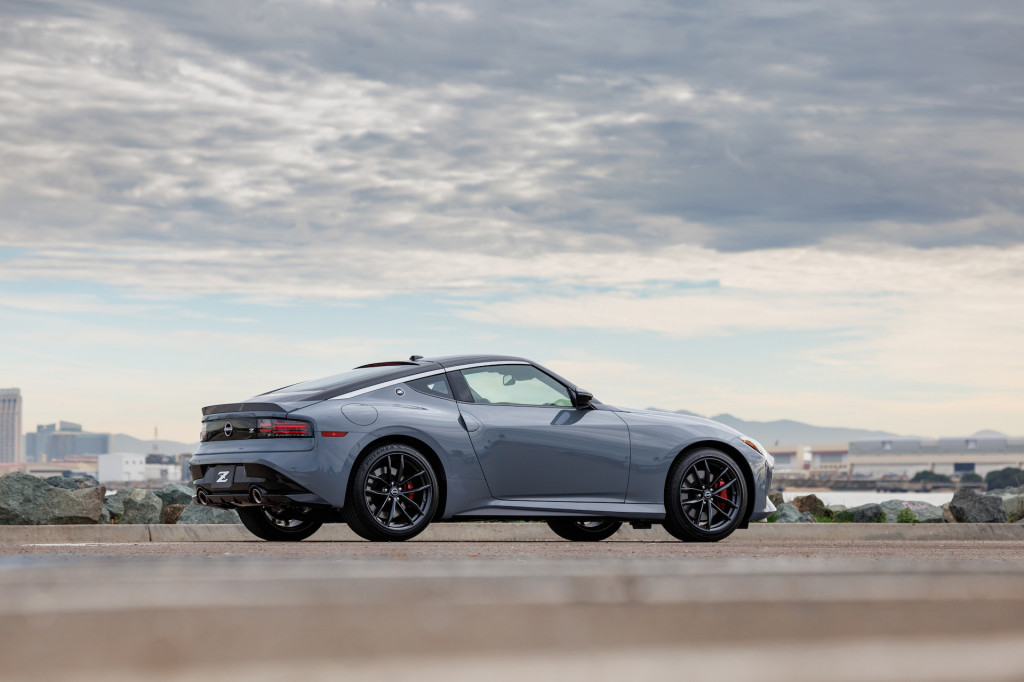 Through the corners of this 1.8-mile road course, the new Z feels familiar, with the same hunkered down, agile feel of its predecessor, though it rides softer.

The feel is familiar because as per Nissan’s edict, much of the 370Z’s engineering carries over. Nissan reinforced the platform to improve stiffness and handle the extra power of a turbocharged V-6. Up front, engineers added more metal reinforcements to the crash structure, underbody, and firewall, and they redesigned the strut tower brace to work with the new engine. Out back, they used closed- instead of open-channel steel to ring the hatch glass, and built up more metal structure. They also applied more glue throughout the vehicle and used a stronger glue to attach the windshield. As a result, the new Z has 10.9% more torsional stiffness and 23.9% more rigidity in the rear hatch area.

With stronger bones, Nissan made suspension changes to soften the ride while also tweaking the suspension geometry. Nissan kept the double-wishbone front suspension, but laid back the front caster angle from 5 to 6 degrees to improve straight-line stability. While that could slow turn-in response, Nissan countered that by stiffening the steering rack even as it switched from hydraulic- to electric-assist power steering. Stiffer spring rates were countered with new mono-tube dampers that provide greater damping control despite a 20% softer tune. In addition, engineers chose 10 mm wider front tires to give the Performance model more contact patch.

Around this track, the Z Performance’s 255/40R19 front and 275/35R19 rear Bridgestone Potenza S007 tires grip hard—Nissan estimates 13% greater cornering g forces—as the car dutifully reacts to the way I toss it into a corner. Brake too late and carry too much speed and it wants to push rather than rotate. Control the speed but get on the throttle too early and the rear end starts to kick out though it’s easily caught. It’s mostly balanced, though the 55/45 front/rear weight ratio indicates it’s tuned slightly toward understeer.

Direct, well-weighted steering helps me put the car exactly where I want, but the softer suspension tuning doesn’t allow the car to respond to my inputs as sharply as I’d like. That gives the Z the feel of a grand tourer more than a sports car and leaves plenty of room for a sharper Nismo model as the true sport model.

Brake performance has traditionally kept the Z from being a track car. The cars simply haven’t had the cooling to handle the rigors of a track day. This car is no different in terms of cooling volume, but the Performance model gets last generation’s Nismo brakes that measure 14.0 inches up front with four-piston calipers and 13.8 inches out back with two-piston calipers. For these track sessions, Nissan has outfitted the cars with accessory performance pads that can be purchased through dealers.

With the enhanced brakes and the controlled speeds on the track, the Z handles several laps with no brake fade and a strong, predictable pedal. The Performance model’s uprated brakes should work for any street driving, but I recommend the accessory pads and probably better brake fluid if you plan to take it to a track or autocross. 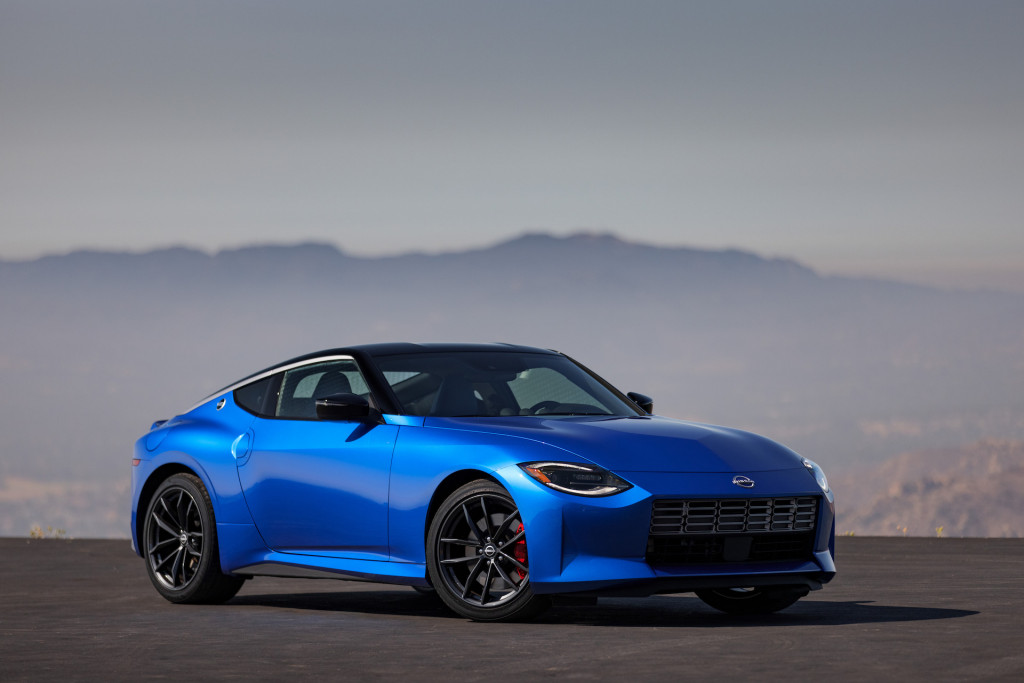 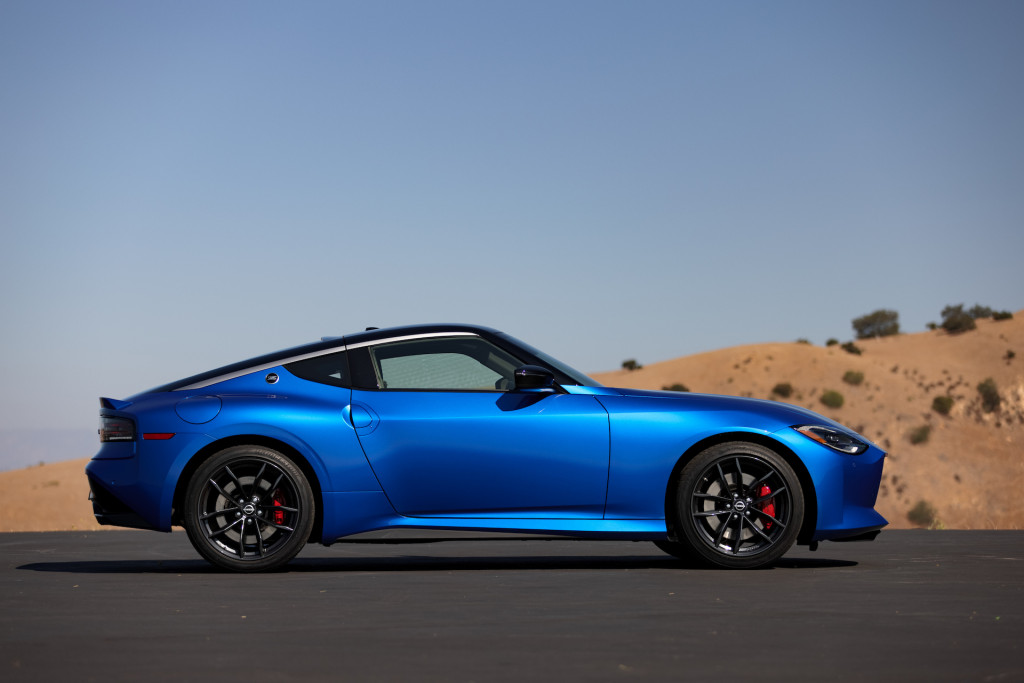 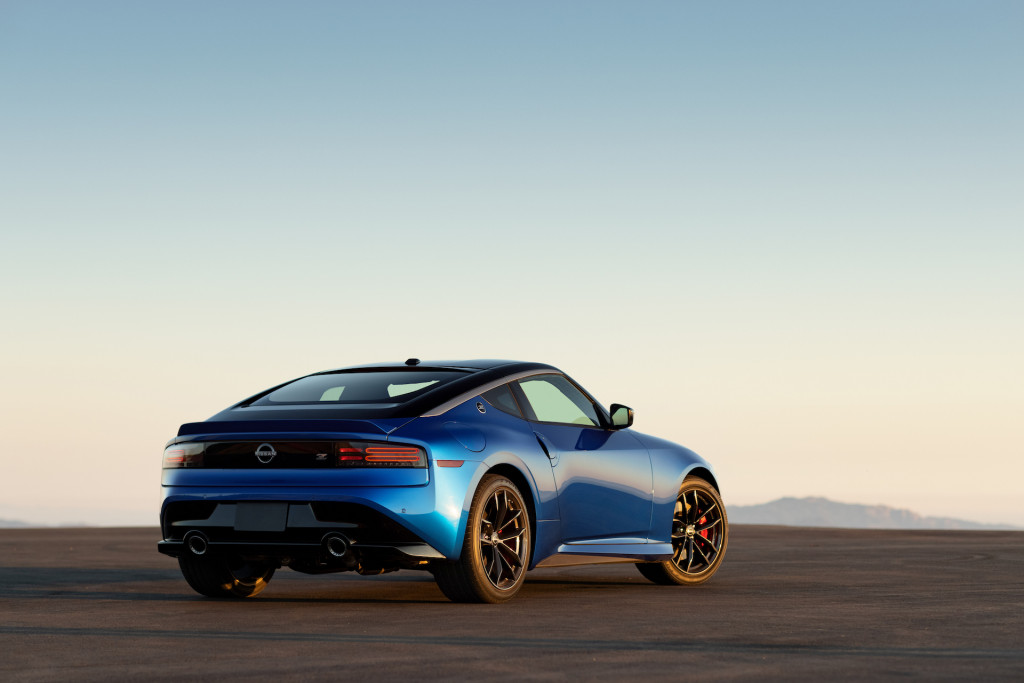 Throwing it way back

The familiarity extends to the cabin, where the driver’s seat has the same split controls as the last model, with switches on the inside of the seat next to the center console and manual controls down and to the left. The seats have good bolstering, but plenty of sports cars have more comfortable, more supportive seats. Nissan says a 6-foot-3 driver can fit, thanks in part to a new telescoping steering wheel, but my head comes close to the roof and I only stand 5-foot-9.

The interior layout still focuses on the driver, but technology and materials quality both take a step up. A new 12.3-inch digital instrument cluster has a shift light that starts at green and turns red as the lights come together in the middle. The IP offers three layouts, including a version with the tach front and center like it’s supposed to be in a Z. The base Sport model has an 8.0-inch infotainment touchscreen and the Performance gets a 9.0-inch version. For those who like to keep track of how the car is running, Nissan provides turbo boost, turbo speed, and voltage gauges atop the dash, and they can be augmented with oil and water temperature gauges in the cluster. 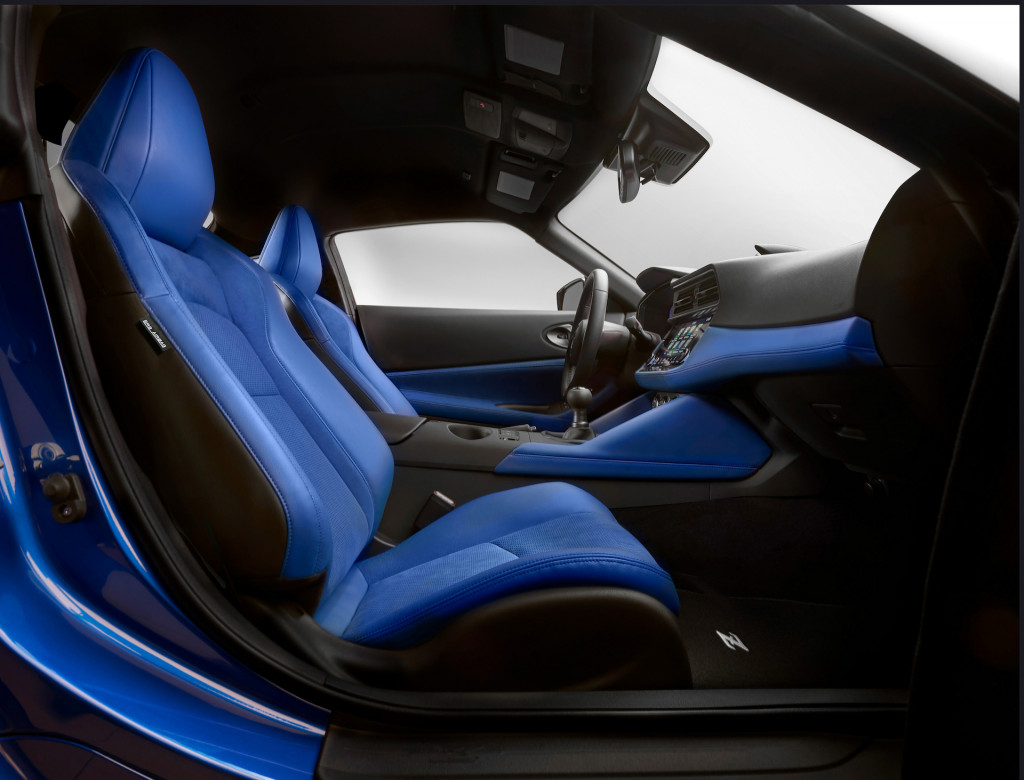 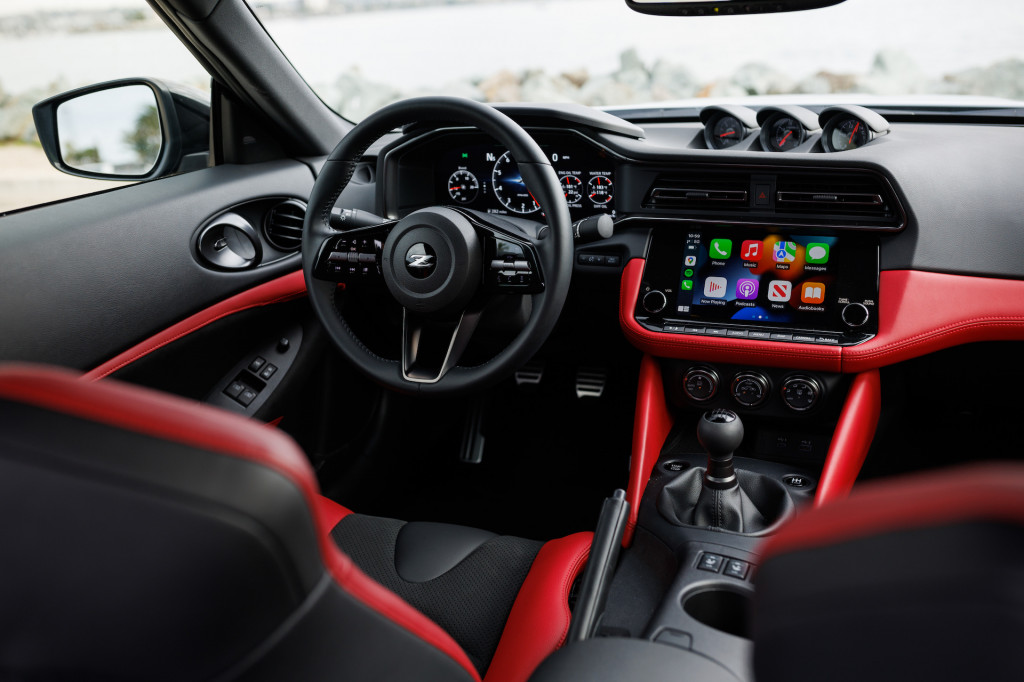 The dash, door tops, and other touch areas are now padded, and the Nissan offers some fun colors like seats upholstered in solid blue suede or a combination of black and red leather. It’s a higher-end environment that’s made more tranquil by additional sound deadener to take some of the coarseness out of the Z.

The Z35 generation looks to the past to move forward, and the new look may be the best reason to buy the car. The proportions scream traditional sports car with a long hood, a low-slung roof that resolves into a fastback look, and a short rear end.

The design of the nose and overall side profile pay homage to the 240Z of the 1970s. The LED headlights have a round look thanks to two half-circles that make up the daytime running lights. The rear recalls the Z32 with horizontal LED taillights. It all comes together to create a beautiful sports car that is unmistakable as a Z. Nissan celebrates the look with bright, bold colors, including Seiran Blue, Ikazucki Yellow, and Passion Red Tricoat.

The 2023 commands a price premium despite its Z34 roots. The Sport model starts at $41,015, and comes with 245/45R18 all-season tires, the smaller touchscreen, and cloth upholstery. That’s $10,000 more than the base 2020 370Z. The step-up Performance model runs $51,015—topping the last Nismo by about $5,000—and adds staggered 19-inch wheels on summer performance tires, bigger brakes, leather upholstery, the 9.0-inch touchscreen, the mechanical limited-slip differential, and a front chin spoiler and rear spoiler.

A special Proto Spec model costs $54,015 and is limited to 240 units in the U.S. It features yellow brake calipers with the Z logo, bronze 19-inch RAYS wheels, an exclusive shift knob lever in cars equipped with the manual transmission, suede and cloth door trim, and yellow stitching throughout the cabin.

Faster, more refined, more capable, and better looking, the 2023 Nissan Z continues a tradition of fun thanks to the passion of enthusiasts within the company. The car they created may not be all-new, but it’s still good news for enthusiasts outside the company because it honors various moments in the car’s 53-year history while offering more performance. Not bad for a skunkworks project.

Nissan provided airfare, hotel, and track time in Las Vegas so Motor Authority could bring you this firsthand report.

Sat Jun 4 , 2022
Содержимое1 THE CHALLENGE2 THE SOLUTION May 05, 2022 Tags: Warehousing, Transportation Infrastructure, Ports, Intermodal, Cross-Docking Tradition Logistics’ new facility in Savannah, Georgia, offers comprehensive supply chain and logistics solutions, from warehousing and inventory management to fulfillment and distribution. THE CHALLENGE With many shippers diverting cargo ships from the Port of […]