Inbound Logistics’ exclusive survey of shippers and truckers reveals where the wind is blowing in the trucking industry today.

If you’ve heard the trucking capacity crunch has eased in 2019, you’ll find evidence to support that idea in Trucking Perspectives, Inbound Logistics’ annual survey of the trucking market. Among the carriers who responded to the 2019 survey, only 21% identify the ability to provide capacity as one of the greatest challenges their businesses face today. That’s a big change from our survey one year ago, when 81% of motor carriers named capacity as a top challenge.

Shippers report easing capacity concerns as well. Among shippers who responded to the survey, 43% say they have experienced a shortage of truck capacity, down from 62% in 2018. [See Figure 1.] Easier access to capacity means fewer delays but a majority of shippers (86%) still report rate hikes. [See Figure 2.] 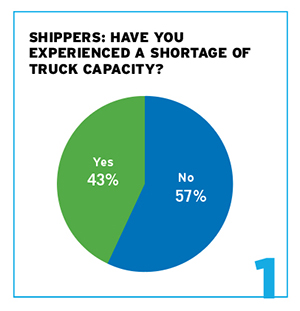 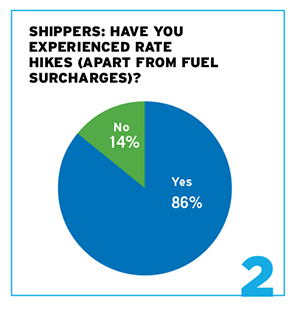 For truckers, the ready availability of trucks signals a softening in the market. Year-over-year truck volumes have been slipping for eight months in a row, according to the Cass Freight Index, and there were 37% fewer loads in the spot market in July 2019 than in July 2018.

A softer market also means lower pay for the people behind the wheel. That might explain why motor carriers still struggle to maintain an adequate supply of qualified drivers. The item that truckers are most likely to cite as a major challenge is the cost of recruiting, retaining, and training those drivers. In 2019, 92% point to that challenge, down only slightly from 2018’s figure of 94%. [See Figure 3.] 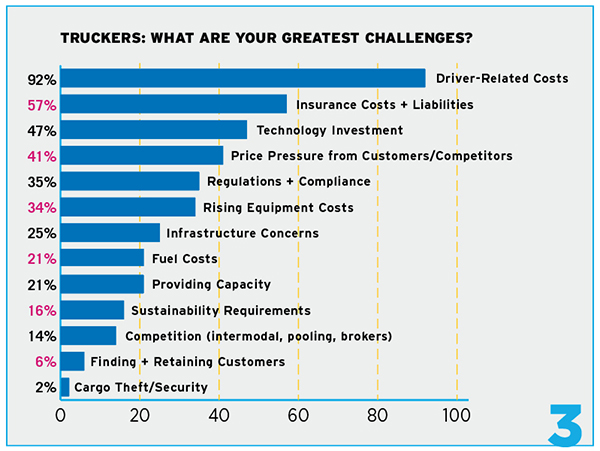 Other cost factors also continue to pose obstacles for motor carriers. This year, 57% mention insurance costs and liabilities as significant challenges, up from 48% in 2018.

For example, customers have been asking AMX Trucking to raise the limits on its automotive liability coverage, says Collins White, president of logistics at the Alabama-based firm. He blames the litigious atmosphere in the marketplace. “Trucking companies are targeted in personal injury lawsuits,” White says. “Customers are starting to worry about getting pulled into some of these lawsuits.”

White cites a recent case in which a trucking company settled a suit for $280 million. “That is unsettling to some customers,” he says. “They’re trying to raise the limits in their contracts so they’re covered.”

Technology is another growing concern for trucking companies. [See sidebar] This year, 47% of respondents cite the need to invest in technology, compared with 33% in 2018. And 34% identify the rising cost of equipment as a challenge, compared with 30% in 2018.

While costs squeeze trucking companies from one side, customers and competitors keep squeezing from the other side, discouraging truckers from raising prices to cover their increased expenses. Price pressure from customers and competitors is a major challenge for 41% of the trucking companies that responded to this year’s survey, a significant rise over the 19% that pointed to that problem in 2018.

Shippers also report increasing price pressure in 2019, with 38% naming it as their greatest challenge, up from 34% in 2018. [See Figure 4.] As shippers strive to pay less, some of them also seek more time to make their payments. “We’re seeing the industry standard go from 30 to 60 days,” says White. “In the past year, a majority of customers have been at over 45 days in their terms.” 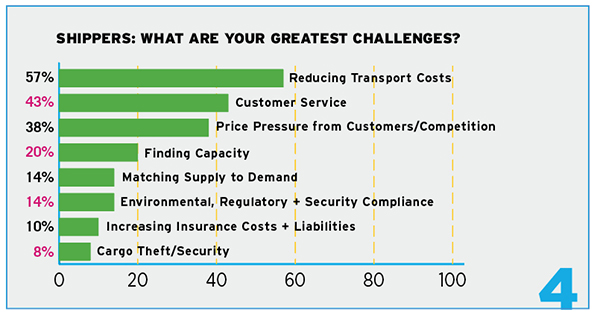 Shippers probably feel they can make those demands because the trucking market is currently soft. “Once capacity tightens back up, or the trucking economy gets better, customers will have a little less leverage,” White says.

This year’s survey also points to some good news for trucking companies. For one thing, it seems to be easier these days to find and retain customers. In 2018, 22% of respondents mentioned that as a major challenge. In 2019, only 6% point to difficulties in that area.

“It is no longer purely a cost-based relationship,” he says. “Shippers are looking for carriers that have a sustainable business model and that have made significant investments in technology. They also look for human collateral that enables a customer-centric focus.”

One shipper who enjoys solid, long-standing relationships with his company’s carriers is Murray Tairney, purchasing manager at Davey Textile Solutions in Edmonton, Alberta. Davey distributes reflective fabrics made by 3M and also manufactures its own high-visibility background fabrics. It uses trucks to ship yarn from a dyeing plant in Montreal to its factory in Edmonton, and to ship product from Edmonton to a warehouse in Webster, Texas.

“I’ve developed relationships with trucking companies, and because of the volume we ship, I’m able to get good rates,” Tairney says.

Another happy change is that carriers feel less of a burden from government mandates such as the Compliance, Safety, Accountability (CSA) program and Hours of Service (HoS) rules. In 2018, 50% of respondents mentioned regulations and compliance as a challenge; the number in 2019 is only 35%.

Still, government regulations do exert pressures that can cause problems for carriers and shippers alike. Take the federal regulation that requires trucking companies to use electronic logging devices (ELDs) to make sure drivers don’t work longer than allowed under HoS rules. Tightly controlling the number of hours a driver works before taking a break, the HoS rules and ELD requirement have added days to some trips, driving up costs for companies such as J.W. Hampton Jr. & Co., an international freight forwarder and third-party logistics provider.

“Between longer lines at terminals and congestion on the roads, drivers are having trouble making same-day deliveries,” says company vice president Bobby Shoule. “For example, we are paying two-day chassis charges on shipments that were usually same day. Some trucking companies are making a mandatory two- or three-day chassis charge part of their policy rather than trying to keep track of chassis returns. This can increase a bill by $75-$100 on average.”

Among the trucking companies that responded to the 2019 survey, 67% are privately held and 33% are publicly traded. [See Figure 5.] Seventy-six percent of them are union shops, 9% are non-union, and 15% employ both union and non-union drivers. [See Figure 6.] 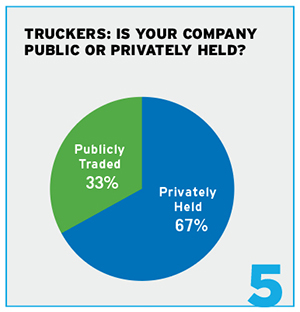 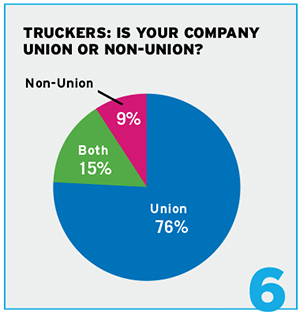 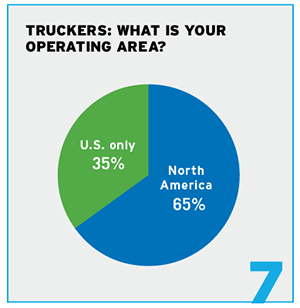 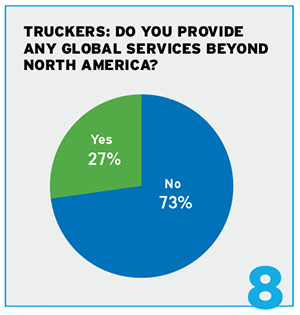 These carriers offer a broad range of transportation services. The most popular is less-than-truckload (LTL), offered by 64%. Forty-seven percent offer truckload (TL) service, and an equal proportion provide intermodal transportation. If you need a load delivered quickly, 59% of respondents provide expedited service. And if you need to lock in capacity, 65% of respondents can offer dedicated contract carriage. Only 15% deliver packages, but 35% provide final-mile service and 36% offer white-glove service. [See Figure 9.] 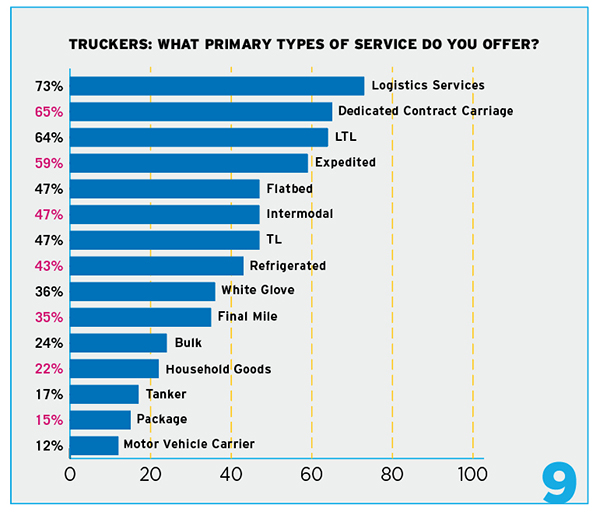 One provider of final-mile/white-glove service is CRST Specialized Transportation, headquartered in Fort Wayne, Indiana. Companies that rely on CRST to transport high-value products and exhibit displays, or to deliver large items to consumers’ homes, have been hearing customers ask for better, faster, and more reliable delivery. That pressure comes from the impact of Amazon, says Bill Clement, president of CRST Specialized Transportation.

“The idea that you can have things, including large-format items, delivered to your business or home rather quickly has accelerated over the past two years and seemingly is on an unstoppable path,” Clement says.

Retailers have developed omnichannel strategies to meet this demand. They expect transportation providers to be flexible enough to pick up product from the backs of stores, from retailers’ distribution centers (DCs), or from DCs in the provider’s own network, Clement says.

Shippers also want visibility into their shipments, so they can keep end customers up to date. “They want to know where their product is in the supply chain and what is the expected time of arrival for final delivery,” Clement says.

Many carriers in our survey provide more than the ability to move a load from Point A to Point B; 73% include various logistics services in their portfolios. About the same proportion—72%—say they have a freight brokerage or logistics division or subsidiary. [See Figure 12.]

“We are seeing many more requests for complete logistics services offerings,” says Hal Justice, vice president of sales and operations at Atlanta Bonded Warehouse Corp. Customers also ask for national—not just regional—transportation for full truckload and LTL loads and parcels, as well as warehousing and co-packaging, he says.

Carriers who responded to the survey serve a wide variety of industries and carry a range of commodities. [See Figure 10.] For example, 89% say they carry “freight all kind,” a term used for loads that consolidate different kinds of product. 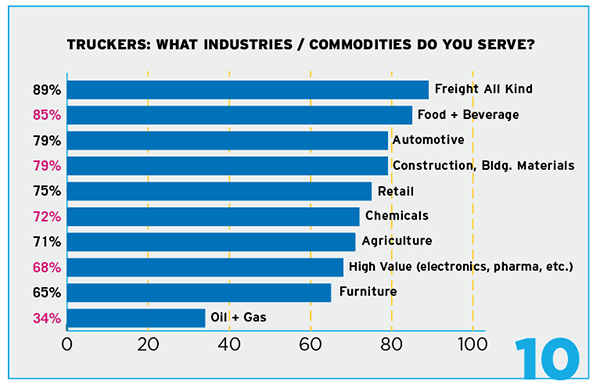 Eight-five percent serve the food and beverage market; 79% haul loads for the automotive industry; 75% serve the retail industry; 72% transport chemicals and 71% transport loads for agricultural companies. Other big categories are high-value products such as electronics and pharmaceuticals (68%) and furniture (65%). Thirty-four percent of companies in the survey serve the oil and gas industry.

If the load you need to tender includes hazardous materials, 85% of carriers in the 2019 survey have the certification necessary to serve you. Even more, 94%, have earned SmartWay certification, showing that they’ve taken steps to promote environmental sustainability in their operations. [See Figure 11.] 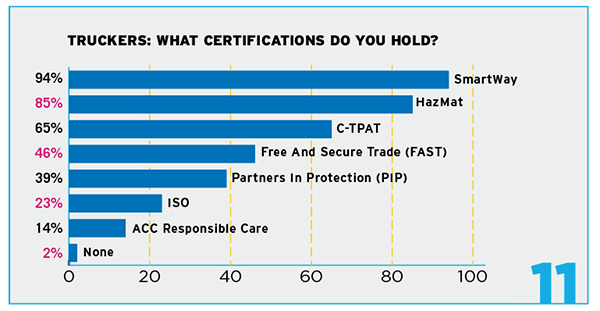 Given the number of respondents that operate throughout North America, it’s no surprise that many of them take part in government programs that make it easier for companies with the necessary credentials to cross borders with commercial loads. Sixty-five percent of carriers who responded to the survey are certified under the Customs-Trade Partnership Against Terrorism (C-TPAT)program, and 46% are certified under the Free And Secure Trade (FAST) program.

As carriers continue to deal with big challenges, including changing customer expectations, they seem to be taking a wait-and-see attitude toward economic conditions that affect the transportation industry. In 2017, 71% of carriers surveyed said the economy was trending upward. In 2018, that number was 88%. This year, the optimistic portion of our carrier survey base is considerably smaller—just 30%. [See Figure 13.] 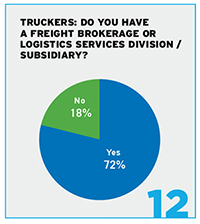 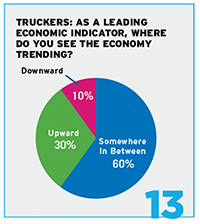 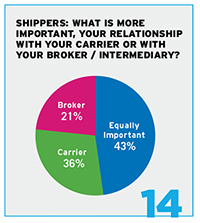 But only 10% say they see the economy trending downward. The majority—60%—see their world in a kind of middle state, with economic indicators hovering somewhere in between up and down.

We’re all waiting to see which way the wind blows next.

Polestar 5 prototype debuts, set to climb the hill at Goodwood Festival of Speed