Shippers still struggle with trucking capacity problems, though nowhere near the levels during the Great Recession. With freight volumes steadily increasing, however, savvy shippers would be wise to secure capacity now while it’s still available. Similarly, a driver shortage continues to plague the industry as carriers battle a negative perception and try to find new ways to connect to Generation X, millennials, and Generation Y drivers.

Despite these continuing challenges, respondents to the 2017 Inbound Logistics Trucking Survey see a bright future. As the backbone of the American economy, trucking companies consistently provide valuable insight into economic trends. Seventy-one percent of this year’s respondents predict the U.S. economy will trend upward; the remaining 29 percent say the economy will hover somewhere between a rise and fall.

Notably, not one respondent indicates that the economy will take a turn for the worse in the coming months. This is quite a leap from one year ago, where a disruptive election cycle and uncertain economic future left carriers feeling less confident—in 2016, only 24 percent of carriers predicted that the economy would take a positive turn.

Ninety-two percent of truckers report that their top challenges are driver-related (see Figure 1). This is not surprising, considering the ongoing driver shortage and rising costs associated with recruiting and retaining. As drivers earn more, and receive better benefits packages to keep them behind the wheel, carriers must pass those costs on to shippers. Sixty percent of shippers say they have experienced carrier rate hikes in 2017, and 79 percent say that reducing transport costs is a major challenge (up from 71 percent in 2016). 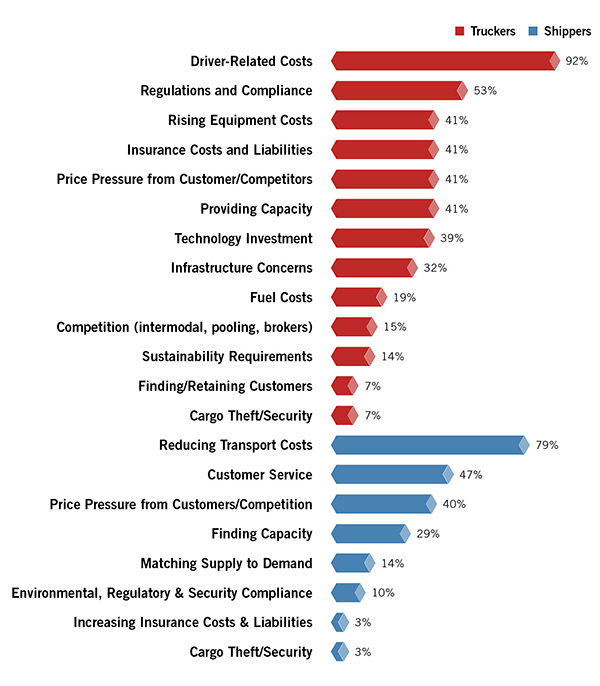 Mergers and acquisitions in the larger business world slowed down in 2016 due to various global political uncertainties. While trucking took longer to succumb to this trend, it now seems to have followed suit. While there have been a few notable acquisitions within the trucking sector, 2015’s mad grab for assets has slowed.

Of course, many of these factors play off each other. As capacity once again becomes a concern, trucking firms should be expanding their assets. However, even though carriers have stopped scrambling for assets, they continue to scramble for drivers. There’s little point in increasing fleet size if there are no drivers to put behind the wheels of newly acquired equipment.

Figure 2 SHIPPERS: Have you experienced… 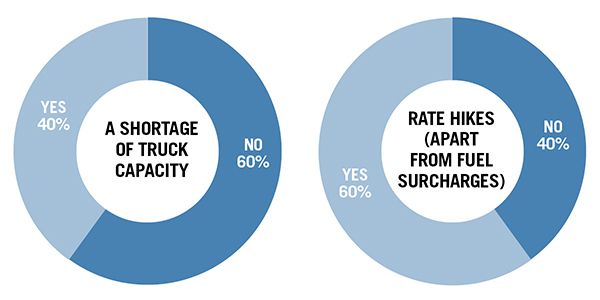 Cutting Through the Red Tape

Only 53 percent of truckers say that regulations and compliance remain a challenge, down from 62 percent in 2016. The Trump administration vowed to reduce regulations for the trucking sector—beginning with an August 2017 rollback of sleep apnea testing requirements for drivers—so that number may drop again next year if the industry deregulates further. Providing capacity crept up again as a major concern for carriers, with 41 percent reporting it as a challenge, up from 23 percent in 2016.

Figure 3: SHIPPERS: What are the most important factors to consider when choosing a trucker? 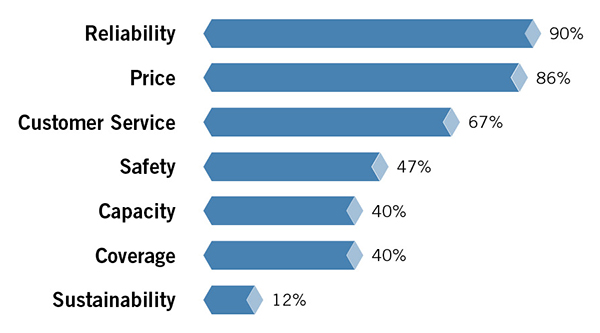 Beyond the rollback of sleep apnea regulations, little else has changed legislatively for the trucking industry to date. Carriers still face a Dec. 18, 2017, deadline to install electronic logging devices (ELDs) in place of paper logs or logging software. While this has been an expensive undertaking for many carriers, IL’s survey results show that most companies are on board. In fact, 91 percent of carriers report that they use ELDs (see Figure 4), and it’s likely that many of the remaining 9 percent are subject to exemptions given for old equipment, low use (8 days of use or less every 30 days), or drive-away/tow-away operations.

Figure 4: TRUCKERS: Do you use electronic logging devices in your fleet? 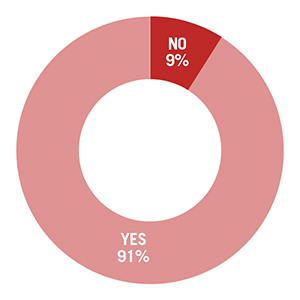 Infrastructure continues to lead the list of legislative problems that plague ground carriers (see Figure 5). While 57 percent of truckers in 2016 declared that transportation infrastructure had the greatest impact on their business, that number surged to 73 percent this year. Continuing federal and state government failures left a crumbling U.S. infrastructure to crumble further. The White House and Capitol Hill talk a lot about infrastructure, but until talk turns to action, trucking companies must depend on inadequate roads and bridges to operate.

Figure 5: TRUCKERS: What legislative issues have the greatest impact on your business?

Along the same lines, 32 percent of truckers list the Highway Trust Fund as a legislative concern. Little has been done to stop the constant poaching that has plagued the fund since its inception. President Trump’s proposed budget funds the Highway Trust Fund through 2021, but also cuts broader Department of Transportation (DOT) funding. At this point it seems unlikely that the DOT will keep its hands out of the cookie jar when funding falls short in other areas.

Energy policy also ties into infrastructure as many trucking firms try to be more sustainable on shorter routes by using natural gas-powered vehicles. Currently, the largest obstacle facing compressed natural gas and liquefied natural gas vehicle usage is a lack of places to fuel up. The current administration’s focus on public-private partnerships could easily address this issue.

Healthcare also remains a major concern for carriers—up one percent from 2016’s data—as in-demand drivers demand better benefits. Trucking firms no longer compete only for freight; they now compete for talented drivers. As such, they must offer substantial benefits packages to attract new drivers. Additionally, Congress’ repeated attempts to repeal the Affordable Care Act throughout 2016 have left carriers unsure about the future of healthcare costs. Unless these issues resolve at some point, healthcare concerns will be on the trucking industry radar for some time to come.

Shippers also struggle as legislative issues travel up and down the supply chain. Many shippers fear that the Federal Motor Carrier Safety Administration’s (FMCSA) initiative will worm its way through the supply chain to kick them in the pocketbook. Twenty-nine percent of shippers surveyed say that they’ve already incurred noticeable costs as a result of the FMCSA’s Compliance, Safety, and Accountability (CSA) program, and an additional 48 percent expect to be hit with associated costs in the future.

Additionally, both truckers and shippers continue to be affected by Hours-of-Service (HoS) rules amidst the driver shortage (see Figure 6). Most of the original burden fell on carriers, who sheltered their shippers from the impact. This year, 78 percent of carriers cite HoS as having a marked impact or somewhat of an impact on their operation. Shippers agreed, with 78 percent saying they either expect an impact down the road or have already seen a noticeable service impact or cost, demonstrating that carriers can no longer avoid passing on costs incurred by HoS rules.

The obvious solution would be to add more drivers to offset the limitations on hours that drivers can spend on the road. But with a shortage of drivers, any HoS provision will continue to have a profound impact.

With the United States in the first year of an unpredictable new administration, it’s difficult to make an educated guess as to how these numbers will look in the months to come. With a $1-trillion proposed infrastructure plan on the table, and frequent promises of deregulation, things could look different for the trucking industry on the legislative front this time next year. At this point, all carriers and shippers can do is wait and see how these promises play out.

With capacity once again a major concern, many carriers are branching out to secure additional capacity through networking and partnerships. Eighty-one percent of carrier respondents say they operate a freight brokerage business under the umbrella of their operation.

Figure 6: What impact have Hours-of-Service regulations had on your operations?

Figure 7: SHIPPERS: What is more important, your relationship with your carrier or with your broker/intermediary? 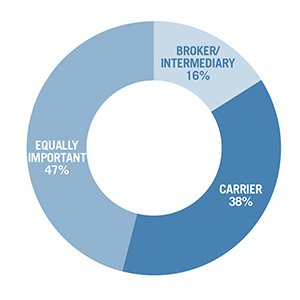 That said, shippers still know what they want from their carriers. Reliability tops the list, with 90 percent of respondents naming it as most important (see Figure 3). Price is a close second with 86 percent, and customer service comes in third with 67 percent. This data suggests that, even though cost is important to shippers, they will still choose a quality carrier over a cheap one.

IL editors selected this year’s list from a pool of 200-plus trucking companies, evaluating surveys, conducting online research, and talking with shippers and truckers alike. This guide serves as a benchmark for the types of services transportation buyers value when looking for new partners or evaluating current ones.

The Top 100 list offers a snapshot of the trucking segment, including large truckload and LTL carriers with global inroads and niche-specific regional haulers that get their white gloves dirty delivering to the final mile.

Together, Trucking Perspectives and the Top 100 Truckers directory provide a comprehensive guide to help you find partners that will drive your company in the right direction.

Tue Jun 28 , 2022
Just like McLaren in the early 1990s, Formula 1 team Red Bull Racing plans its own car. The new Red Bull will be a hypercar dubbed the RB17, and just 50 examples are planned, each priced at more than $6 million. Ford launched a new version of its Bronco for […]