It seemed like an oversight from the start. Why offer a sports car without a manual transmission from the get-go if plans call for one later?

When Toyota released A90-generation Supra for 2020 with a sizable assist from BMW, the car came exclusively with a very capable ZF 8-speed automatic. While that transmission has paddle shifters, a sizable portion of the buyers the Supra is meant to attract still want the man-machine connection that a manual provides. Without one, Toyota no doubt left sales on the table.

Toyota remedies that situation for 2022 with the release of a 6-speed manual for twin-turbo 3.0-liter inline-6 versions of the car. Toyota invited Motor Authority to Park City, Utah, to experience the new manual on a 2-plus mile road course at the Utah Motorsports Campus. Laps around the track, as well as a more subdued drive around the track’s ring road, showed the manual is a key ingredient the car was missing, and it unlocks a fun factor that every sports car should have. 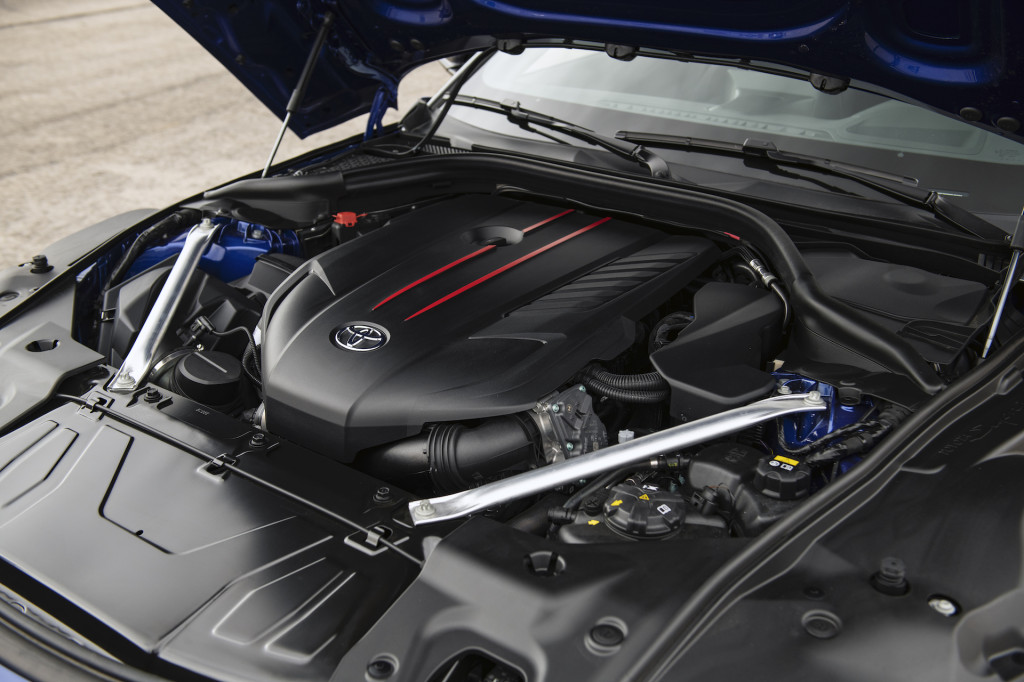 The new manual is built by ZF and was designed for the power and torque of the BMW engine it serves. However, Toyota representatives say the company’s engineers worked with ZF to give it the character they wanted for the Supra. They started with an existing transmission housing and gear set, but engineered a larger clutch friction area and a stronger spring. They also removed some of the acoustic materials to save weight and developed the new short-shifter.

Still, the BMW feel isn’t lost. If anything, this transmission takes the best of the BMW elements and improves them with Toyota flavor.

Driving a lap at a time, the flowing 12-turn course required only the first three gears. Immediately upon takeoff, the clutch felt light, with a natural, medium take-up point that makes it hard to stall and very easy to shift above first gear. Gear changes had a familiar soft pop as I slotted them from gear to gear via a shift lever that’s slightly shorter than typical BMW fare. The short, satisfying shift action would feel right at home in the related Z4. In fact, it would also slightly improve the feel of the manual gearbox in the M3 and M4, mostly due to the shorter shift lever. 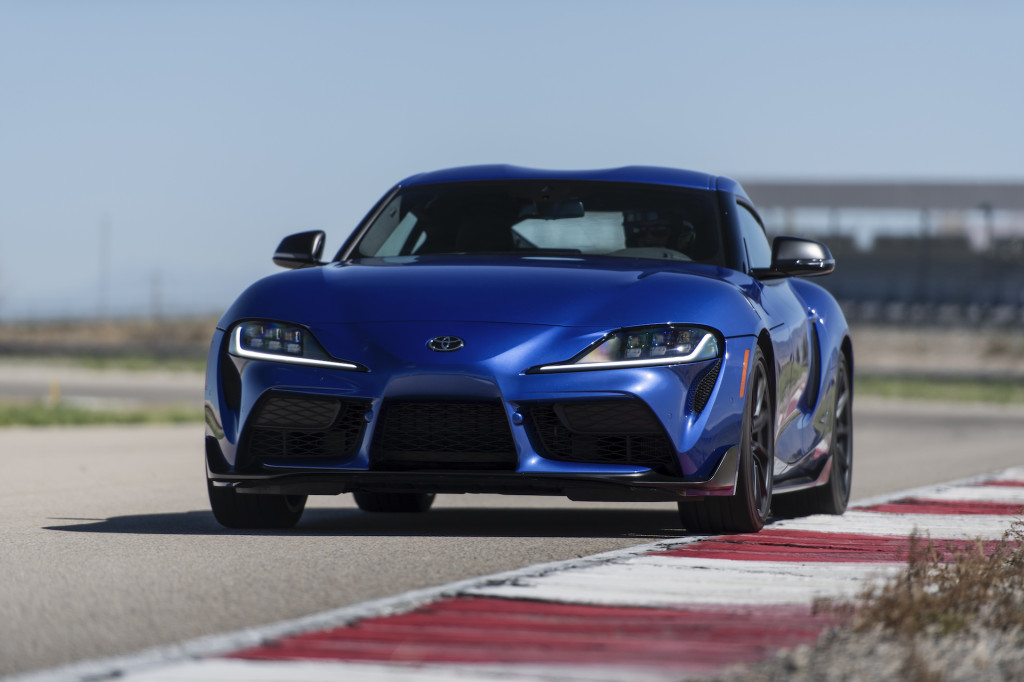 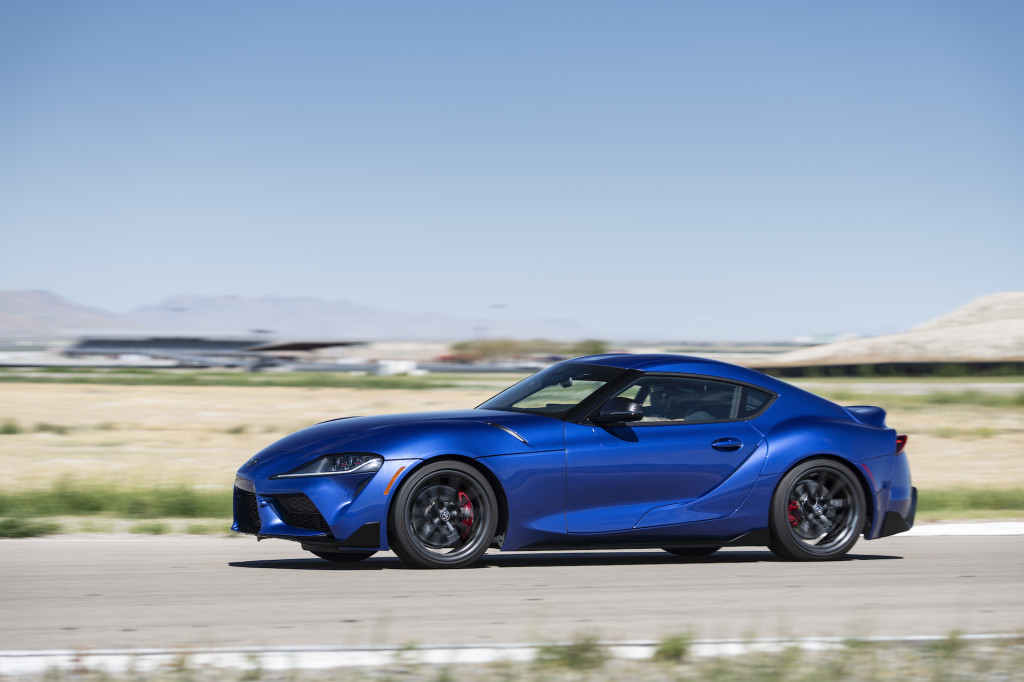 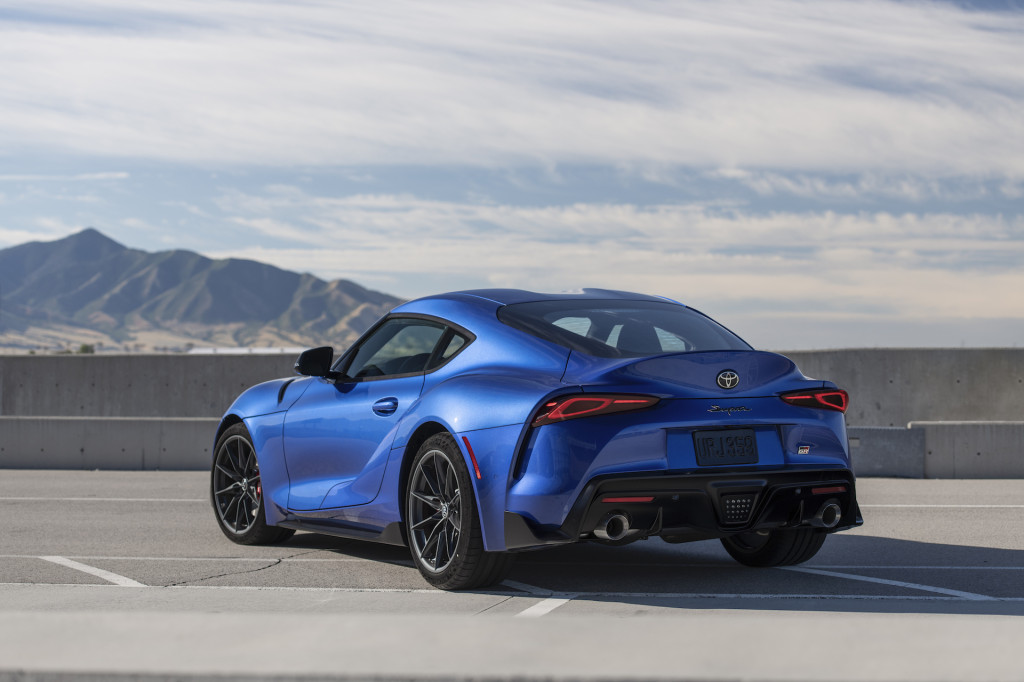 The inline-6 also keeps its BMW feel. It revs as freely as it always has, with a meaty torque band that starts at the 1,800-rpm torque peak—actually a plateau that runs to 5,000 rpm—and  builds smoothly and relentlessly up to the 6,500-rpm redline

With the automatic, the Supra is a quick car, posting a 0-60 mph time of 3.9 seconds. Like most manuals, this 6-speed is slower, but only a touch. Toyota quotes a 4.2-second 0-60 mph time for the manual. That’s less of a loss than the half-second or so most manuals scrub off, and it’s due to revised final gearing. With the manual, Toyota gives the Supra a shorter 3.46 final gear ratio compared to 3.15 with the automatic. The shorter gearing also makes it easier to tap into the power upon corner exit to rocket to the next corner.

Standard rev matching also keeps the car stable when downshifting for turns without the need for deft heel-and-toe action. It’s turned on by default, but drivers can turn it off through the Individual drive mode settings.

My track drive proved that with the manual the Supra may lose some of the outright performance, but it makes up for it with driver engagement. 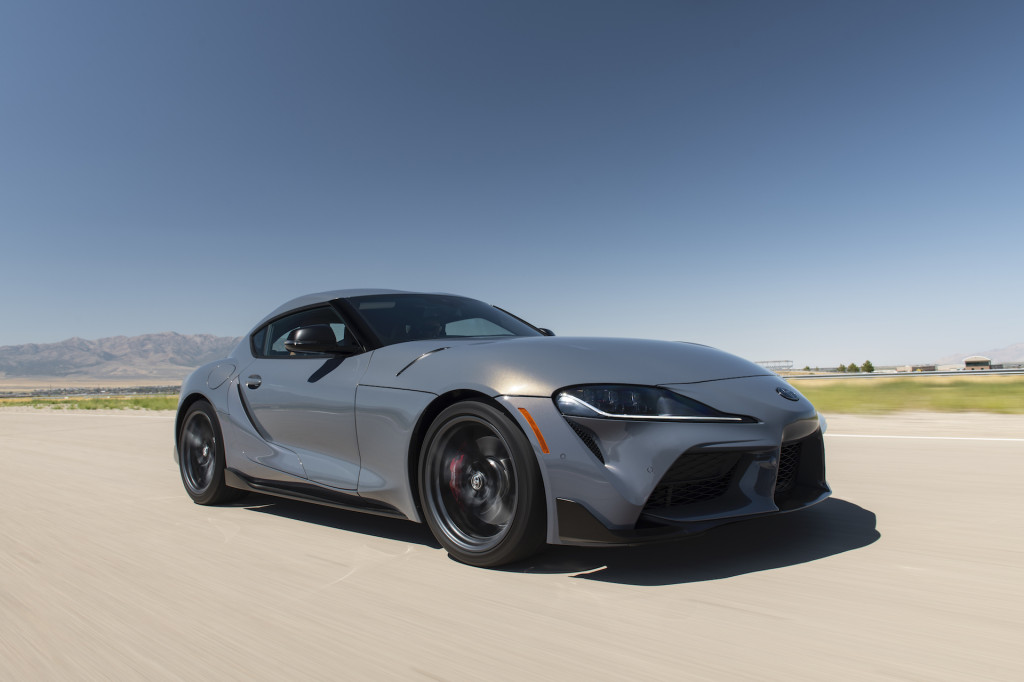 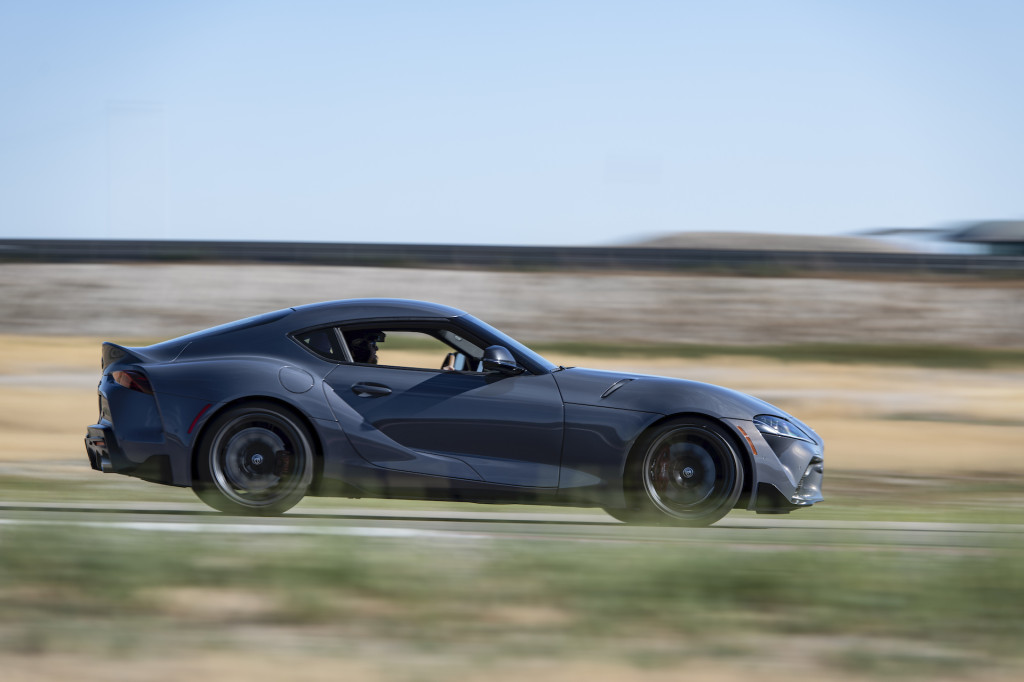 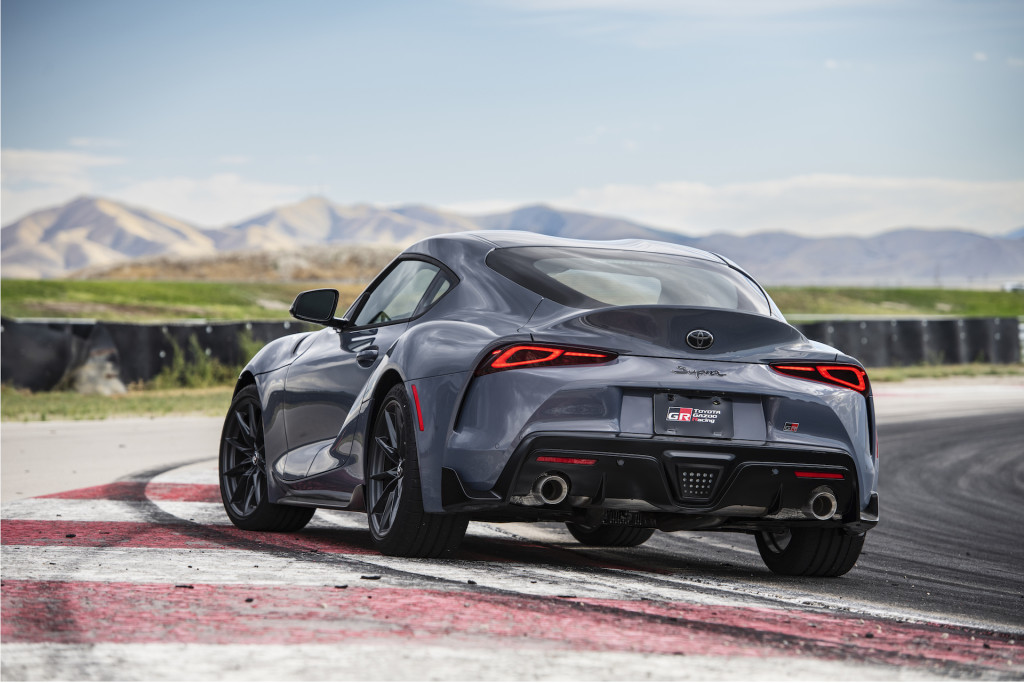 Tweaks for 2022 on all models also have a slight effect on the Supra’s ride and handling. Toyota retuned the steering and adjusted the dampers for improved roll balance and ride comfort, but I couldn’t feel it on the track. It would take a back-to-back drive to notice any difference.

In the twisties, the Supra is still a tight, darty machine with lots of grip and great short-area agility. The steering remains quick and direct, but without a lot of feel for what’s going on at the front wheels. And the rearward seating position still exposes occupants to the back-of-the-bus up-and-down motions over bumpy or broken pavement.

Toyota also tames down the possibility of lift-off oversteer for 2022, which we viewed as a possible issue when we first drove the car. We figured the car’s big-time power could bring the rear end around if the driver gets on the gas too soon when exiting a corner, and that’s when the 6-cylinder made 335 hp versus the 382 hp it got for 2021. The manual makes that more likely due to a possible sudden clutch engagement combined with a premature kick of the throttle. To counter that issue, Toyota revised the stability control program to intervene at an earlier point when there’s a sudden loss of grip with the suspension in its Sport mode. 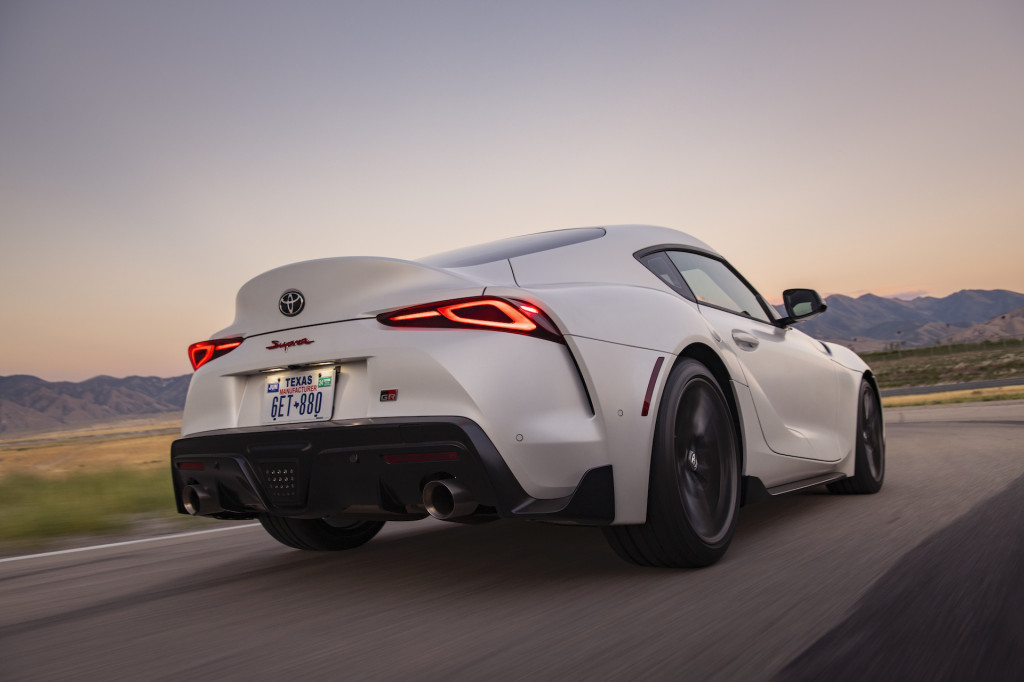 I drove the Supra hard on the track and never experienced any tendency for the rear end to come around. I may not have felt the suspension and stability control changes Toyota made for 2022, but I also feel they made the car safer during performance driving.

Manuals used to be a credit option, but now they’re so rare they usually just take on the price of cars equipped with the automatic. That’s the case here. Buyers can get the new 6-speed on the A90 Premium and A91 Special Edition models at no cost.  The starting price for the A90 Premium is unchanged from the automatic’s at $56,745, while the A91 Special Edition runs $59,440 and is only available with the manual.

A manual in the Supra is an oversight no more. It costs no more money, and while it won’t make the car rocket from 0-60 mph quicker or go around a track faster, it will make it more fun for enthusiasts every time they row their own gears. Isn’t that the point of a sports car in the first place?

Toyota paid for airfare, lodging, and track access for Motor Authority to bring you this firsthand report.

Wed Sep 7 , 2022
Volkswagen finally has a modern Microbus on its hands, only this time around the vehicle is called an ID.Buzz, and is electric. It’s not due in the U.S. until next year but we’ve already had a chance to test one. The hype is real. Another vehicle we tested is the […]