—with additional reporting by Viknesh Vijaynthiran

The first battery-electric Cadillac glides into garages and showrooms soon, and the 2023 Lyriq crossover SUV feels anything but familiar. It’s a revelation for a brand that’s been saddled by some of GM’s lesser efforts in the last decade—and blessed with some of the most memorable gasoline-driven cars in its history in just the last few years.

With up to 312 miles of estimated range and performance solidly in the grand-touring genre, the Lyriq will rub elbows with other tony electric SUVs running headlong into the mix this coming year: the BMW iX and Benz EQS SUV among them, along with the Rivian R1S—all greeted by the early movers, Audi’s E-Tron and Jaguar’s I-Pace.

Forget the ELR, please—but you’ll also have to forget the Blackwings to see how the Lyriq keeps good on Cadillac’s latest promise of reinvention. It starts with style.

The 2023 Cadillac Lyriq pipes in light to its front end through laser-etched patterns that cast a distinctive LED glow.

There’s a glow to the Lyriq, a byproduct of the 736 LEDs that grace the exterior of the vehicle. Everywhere you look something is lit up, from the cool minimalist version of the Cadillac badge with the color removed in favor of light, to the polycarbonate black grille with numerous slivers of light that ring the sides and bottom edge. Instead of traditional headlights, nine individual LEDs are stacked up the Lyriq’s fascia on each side, the top three of which form the high beams and the bottom six the low beams. The taillights wrap far around the rear of the Lyriq, creeping up to the D-pillar and giving it a visual signature even from the side.

Colors will be limited: Satin Steel Metallic or Stellar Black Metallic will be the only two hues available at launch.

It’s an impressive design flourish, and also a preview of what’s to come. The theme’s taut lines, clean surfaces, and distinctive grille are destined for future Cadillac EVs, such as the flagship Celestiq electric sedan and three more electric Caddys in the pipeline, including an Escalade-inspired model.

Inside, the Lyriq’s 33-inch curved display combines the instrument cluster and infotainment screen in one pane. Unlike other large screens in other models—Mercedes’ Hyperscreen, for example—this is all one screen behind a single pane of glass. It’s a showpiece, and it functions like the screen in the latest Escalade, but the presentation here is much cleaner and more futuristic with its seamless look. It’s underscored by a strip of slim joystick-driven air vents, a column shifter, and door-mounted power-seat controls. It’s remix of vintage cues in a cool future-think blend of a billion shades of ambient LED light. 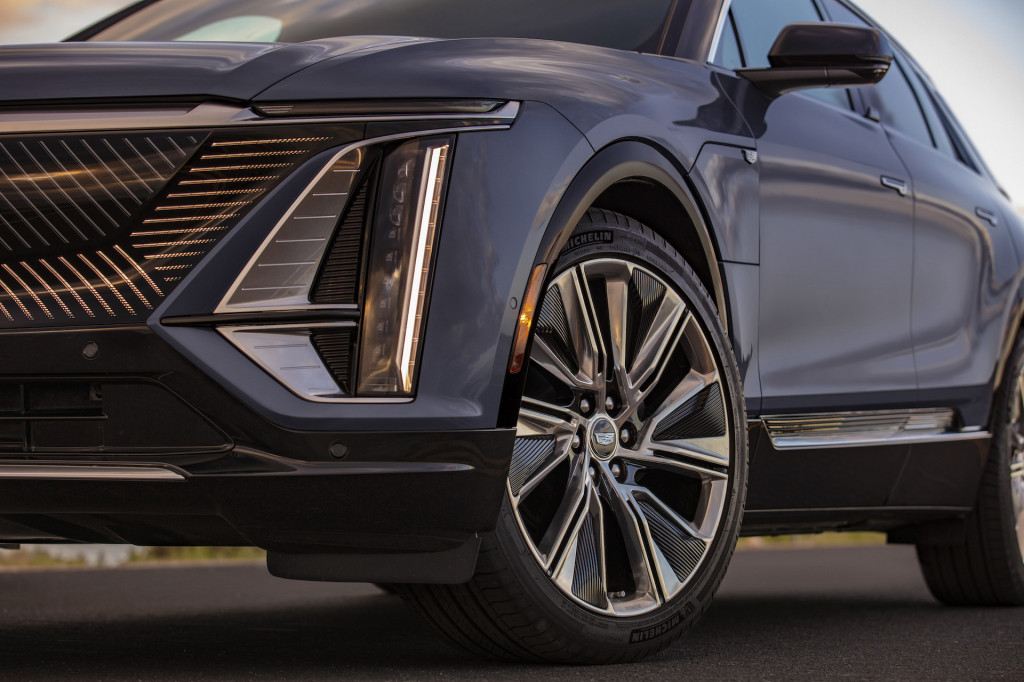 2023 Lyriq performance: touring-grade, with a future in sport

Sigh over the CT5-V Blackwing’s supercharged V-8 if you have to. You’ll get over it quickly in the EV era because the Lyriq’s electric powertrain has the potential for even more shattering performance.

It’s nowhere near that yet, but it’s strong and swift in its initial edition. With a single-layer 102-kw pack and a rear-mounted electric motor, the Lyriq pushes out 340 hp and 325 lb-ft of torque to its rear wheels, enough for an estimated 0-60 mph time of well under six seconds and for a full-charge range of 312 miles. That’s despite the thick Lyriq’s 5,610-lb curb weight.

Cadillac programs in drive modes and a one-pedal option, but tucks them into the Lyriq’s infotainment system rather than elevating them to hard-button status on the dash—which speaks volumes as to the Lyriq’s capable but not enthusiastic intent. Tap the screen to select one of the three flavors of one-pedal driving, from strong regenerative braking that can generate 0.3g of deceleration, to a light level that simulates engine coasting. The Lyriq syncs it all seamlessly with the friction brakes, but there’s also a left-side steering-wheel paddle that’s pressure-sensitive and can control regen, too.

Another tap can flip the Lyriq from Tour mode into Sport if you want, but it doesn’t elevate the Lyriq’s slow low-speed steering. It’s a long, wide car and it can require a half a lock of steering just to negotiate traffic circles and hairpins.

The Lyriq’s ride quality overshadows its straight-line performance and its steering shortcomings. Without energy-consuming air springs and adaptive dampers, the Lyriq’s twin-tube dampers mind-meld with a five-link suspension design front and rear to generate a level of poise that’s closer to the complex electronic suspensions than it is to more basic layouts. It’s a sublime ride, one that buffs the bumps in the road  even when its stock 20-inch wheels swap out for available 22-inchers, without bounding or pistoning. 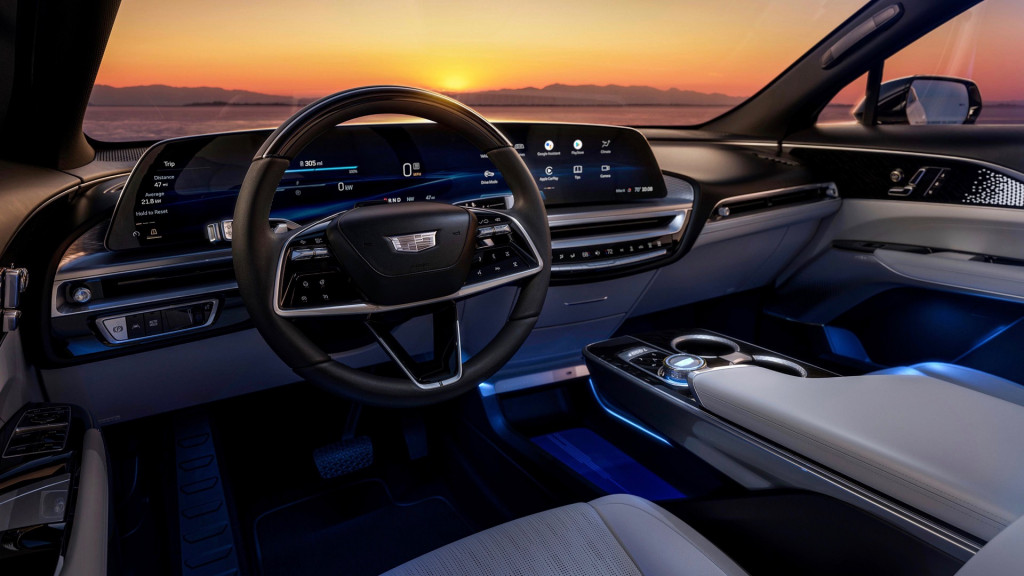 Synthetic leather, ambient lighting, lots of laser-cut trim and glints of aluminum dress the Lyriq cabin to the nines.

At 196.7 inches long, on a 121.8-inch wheelbase, the Lyriq falls somewhere between the XT5 and three-row XT6 in the Cadillac lineup; it’s about the size of a Tesla Model X. The doors are not nearly as oddly constructed as those on the Model X, but the door “handles” need to be pressed—and then passengers must open them with a separate black flag of plastic, at least in front. On the rear doors, there’s not even a flag, just a lined area on the underside of the door skin itself. It acts as if power-close doors were meant to be standard, but didn’t make the cost or complexity cut.

Instead of leather, the Lyriq’s upholstery uses synthetic upholstery in gray or black. The front seats are very comfortable, with plenty of support for both backs and legs. Seat adjustment controls have moved up to the doors (a la Mercedes), which Cadillac said allows for larger storage pockets in the doors. Below where a traditional console-mounted shifter would sit is also a large storage area that can easily fit a large handbag.

The back seat feels especially spacious, with a plentiful 39.6 inches of leg room and ample head room for 6-footers. Two people will be comfortable, but the middle back seat cushion stands out and presses uncomfortably between the shoulders. A glass roof lets in billions of photons every second, and has what must be one of the longest sunshades in any production vehicle, one that can take 20 seconds or more to close or open.

Behind the rear seats is 28.0 cubic feet of cargo room, which expands to 60.8 cubic feet with the seats folded, good for at least five roll-aboard suitcases. Two buttons in the cargo area can lower the seats, but they must be raised manually. A slim but deep storage bin sits under the cargo floor but the Lyriq has no front trunk, just a black plastic trim piece that hides the place for a future front motor.

Super Cruise costs more, but the Lyriq carries standard adaptive cruise control. A head-up display isn’t available, Cadillac says, because the vehicle has been pulled so far ahead of its initial production schedule.

The Lyriq can be started, opened, locked, and pre-conditioned with Cadillac’s digital key on your smartphone. It connects to that phone for wireless Apple CarPlay service, but hosts a native Google-based infotainment system with a user-configurable home screen, a wi-fi hotspot, and navigation. It’s GM’s latest effort to save its bandwidth for car stuff and to dole out coding to the experts, and works swiftly and mostly well despite the pedestrian quality of Google’s off-the-shelf voice responses and buggy moments where it dropped the wireless connection to my smartphone.

DC fast-charging can reload the Lyriq’s battery by about 76 miles in 10 minutes.

Cadillac will offer a $1,500 credit for its own Qmerit home charging system, and says if it’s installed on a 100-amp line that the car’s available 19.2-kw onboard charger will allow up to 51 miles of range per hour. That’s a pie-in-the-sky scenario for most homeowners. With its 240-volt, 11.5-kw AC onboard charger, GM says that the Lyriq can recover up to 31 miles of range per hour.

Away from home, DC fast-charging via EVgo at up to 190 kw will permit about 76 additional miles of range in 10 minutes. The company plans to activate Plug and Charge functionality, for easier road-trip charging without cards, apps, or fobs, but it won’t have it ready by the time the Lyriq launches. 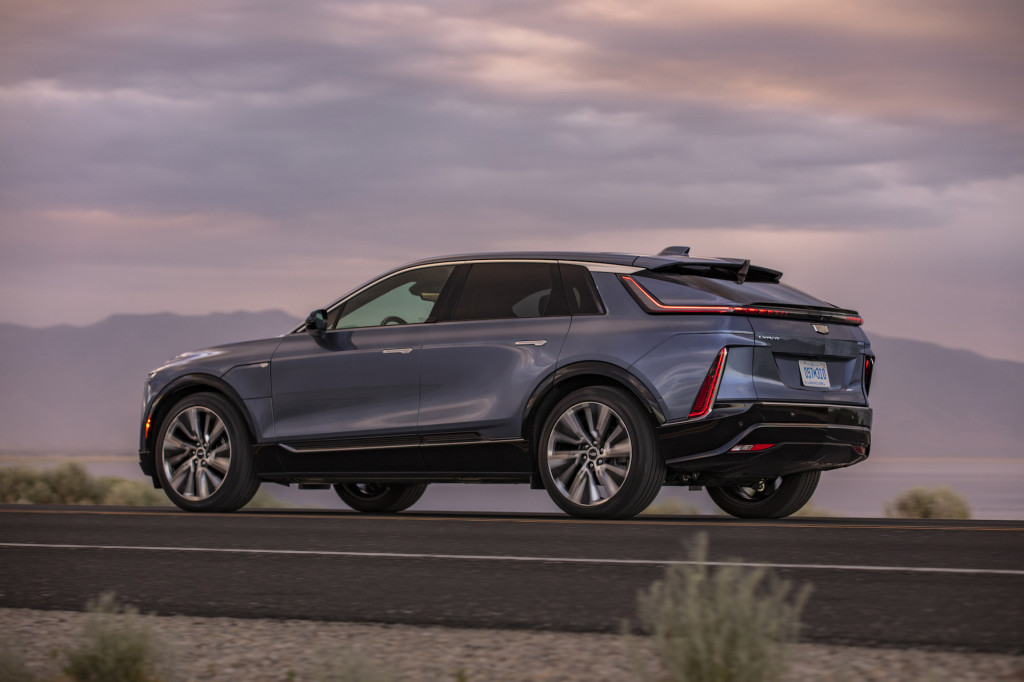 The Lyriq is based on GM’s third-generation electric-vehicle platform, known as Ultium. The platform will spawn dozens of EVs spanning GM’s portfolio of brands, with the first already in production: the 2022 GMC Hummer EV.

For the moment the Lyriq is made from unobtanium. Wearing a sticker price of $59,990 in launch-edition form, $62,990 in single-motor rear-drive spec, and $64,990 in dual-motor all-wheel-drive trim, the 2023 Lyriq has already sold out. Order books are almost ready to open for 2024, with few changes expected other than optional features and a likely price hike. It’ll end up in fewer Cadillac showrooms than any of the brand’s recent launches, since many Caddy dealers have bailed on expensive upgrade requirements to sell the new EV.

They may regret that decision. The Lyriq feels all of a piece, with sure-footed dynamics and space to match all the new electric SUVs now rolling on to the scene. It’s a sweet hook that will get EV enthusiasts interested in the new tune it’s playing—even if it fails to chart with the Blackwing crowd.

Cadillac flew us to Park City where, for the most part, we left the Lyriq in Drive. Life’s full of contradictions, isn’t it?