As the 17.5-foot 5,855-lb Lincoln Navigator cruised up I-94 at 80 mph, both my hands were firmly affixed to the McDonald’s cheeseburger. Moments later, cheeseburger consumed, I asked my buddy Mark to pass me my fries. I was living my best American life in the leather- and wood-lined luxury liner, letting it cruise confidently while I paid less than strict attention.

Welcome to the future of driving.

After spending a week cruising around town and road-tripping with family and friends, it’s clear Activeglide is in its infancy, and that will require updates to keep up with the competition.

What is Lincoln Activeglide?

The Activeglide system delivers on Lincoln’s promise of hands-free driving, but it’s an assist system for someone who is in the driver’s seat and bears the responsibility—French fries or no. The system takes over control of the throttle, brake, and steering inputs at speeds of up to 80 mph. In theory it could, or should, be able to aim the vehicle down the road for hours at a time both in traffic and while in the middle of nowhere. But it does not make the Navigator a self-driving car.

Today, the system works on 130,000 miles of divided highways that have been mapped via radar. It shouldn’t be used in construction zones. It won’t work when there’s cross-traffic or undefined exits. And it’s supposed to request assistance when it deems a curve in the road to be too much for it to handle safely. 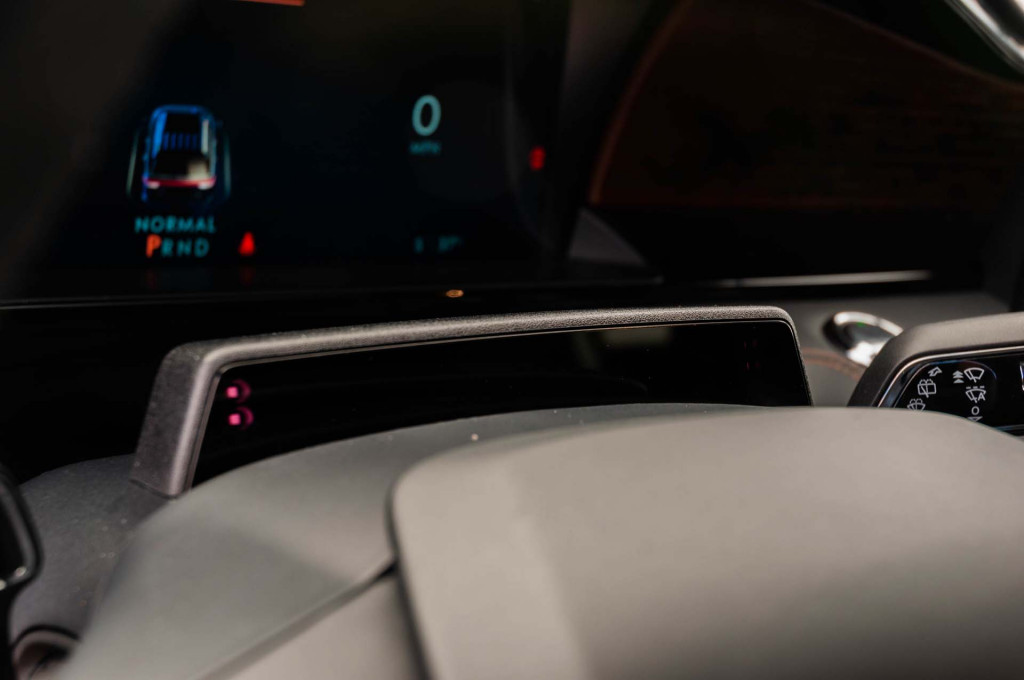 Just like GM’s Super Cruise system, Activeglide has a driver attention monitoring device. An infrared camera system is mounted to the steering column and watches the driver’s eyes to ensure full attention is being paid to the road.

During multiple testing sessions it was clear Lincoln (and subsequently Ford) set an extremely short leash with a mere 4-second allowance before the system demands your eyes are back on the road. In the early days of Super Cruise the leash was about the same length, but GM’s eased up through multiple system updates now allowing eyes to wander for well over double that time period. 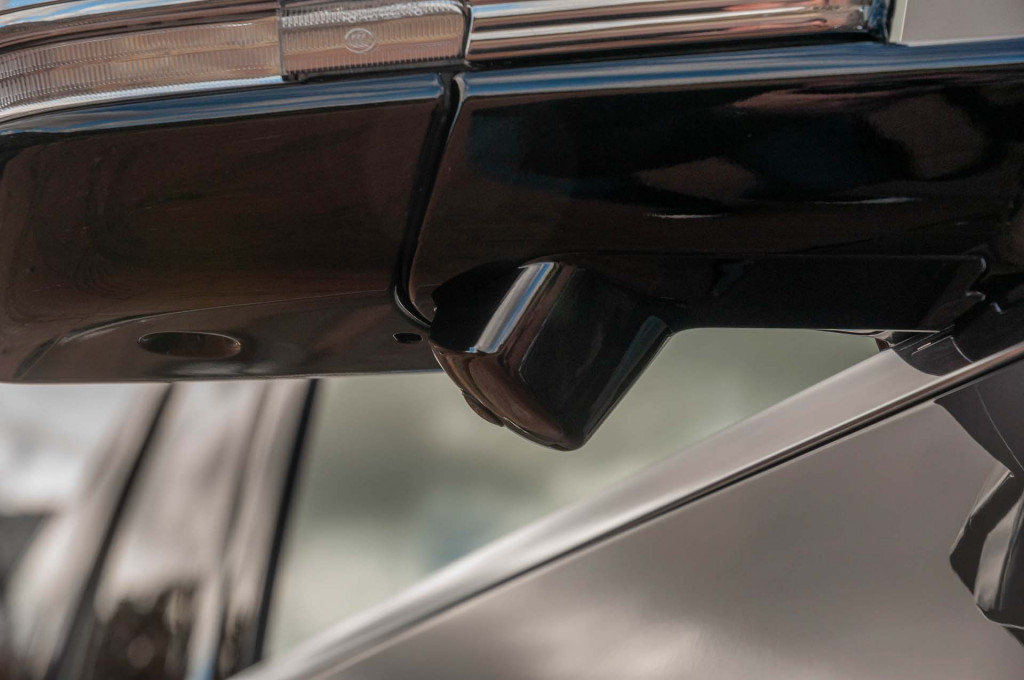 The cameras on the exterior of the Lincoln Navigator tie into the active safety systems to create a 360-degree view around the vehicle.

Bluntly: Lincoln’s (and Ford’s) system is much simpler than that of General Motors and lacks a lot of what makes GM’s system so impressive.

Activeglide relies on the forward-facing camera mounted at the top of the windshield, five radar units around the exterior of the vehicle, a GPS receiver (not a high-definition GPS unit, a key detail), the vehicle’s control systems (though none specifically dedicated to Activeglide), the electric power steering system, a 4G modem, and a driver-facing camera.

There is no redundancy built into the hardware. The reason? Activeglide Chief Engineer Chris Billman told Motor Authority it’s not required because the driver is the fallback, and as such is expected to be ready to take over the vehicle at all times. 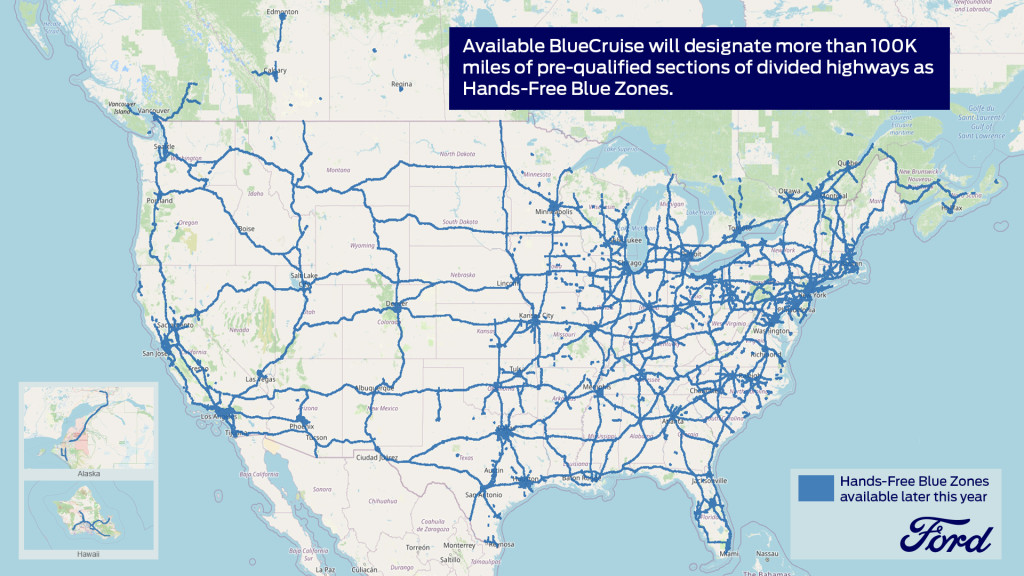 The system relies on radar map data that is downloaded to the vehicles once a quarter in totality (GM has over 200,000 miles and that’s about to double to 400,000 miles of mapped roads). The entire set of data lives on the vehicle at all times in its entirety and isn’t fed to the system live tile-by-tile like GM’s Super Cruise. 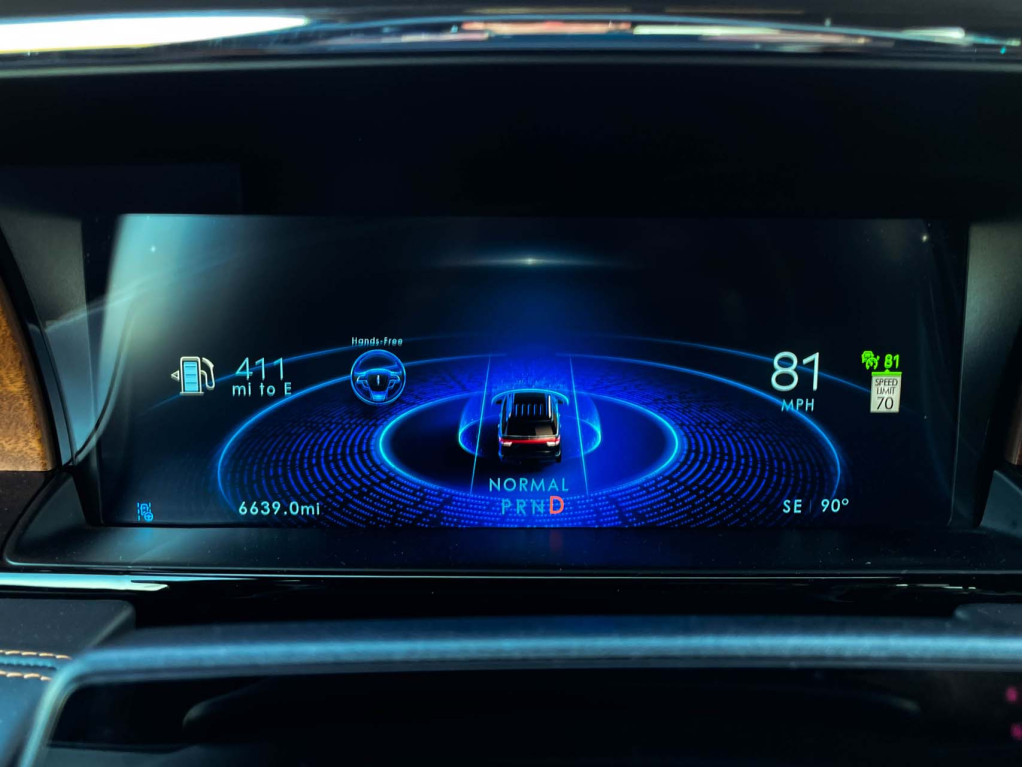 Lincoln has set up Activeglide to be possibly one of the most seamless and easiest-to-use systems on the market. First, ensure adaptive cruise control and lane centering with hands-free systems are turned on in the Driver Assistance settings on the 13.2-inch touchscreen infotainment system.

Then, upon merging onto a freeway or entering a mapped zone, an alert will pop-up in the 12.0-inch digital gauge cluster alerting you that the vehicle’s in an Activeglide zone. Hit the cruise control button and the system will take a moment to read the road, understand its surroundings, and then the gauge cluster goes blue with a Navigator image in the center and a constant pulse of dots flowing out from it. A graphic of a steering wheel appears on the left and indicates the vehicle is now in hands-free mode. 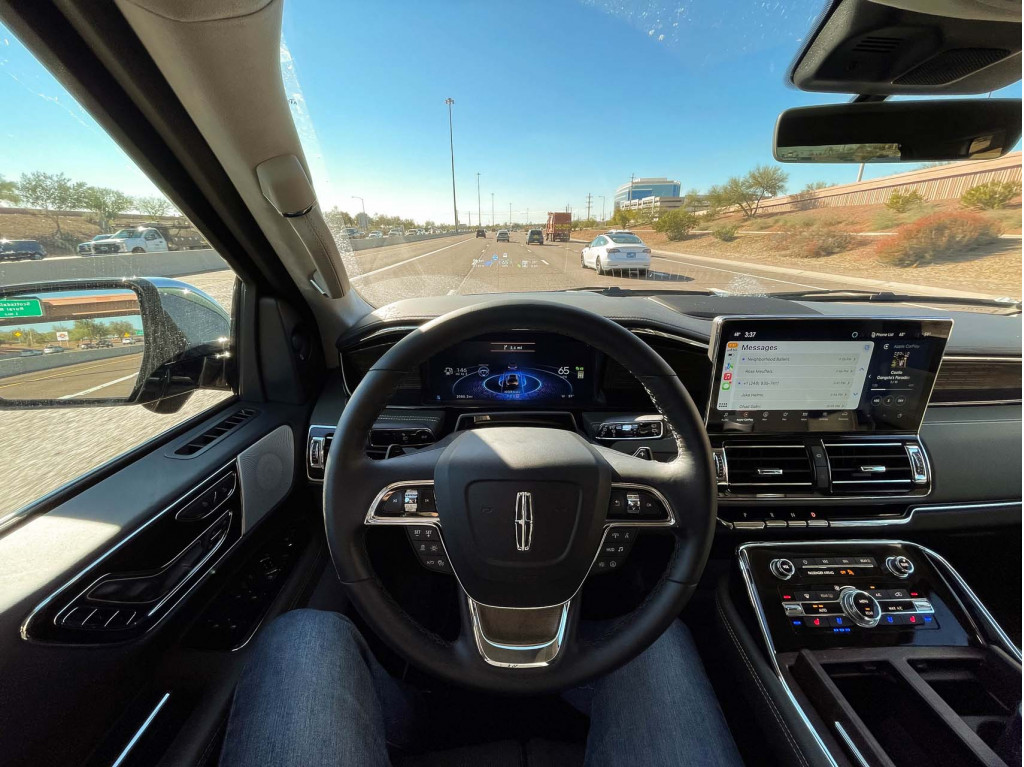 Activeglide and the Navigator can’t accurately determine which lane the vehicle is located in during certain situations. Without an HD GPS receiver the hardware can’t pinpoint the vehicle down to the specific lane on the road. Relying on the cameras to place the vehicle on the road can only work when the cameras can see the road. Cameras can’t see through metal and cars, so when the Navigator’s in the middle lane and there are vehicles on either side of it, seemingly it doesn’t actually know it’s in the middle lane of the road. This presented a challenge in certain situations as the Navigator attempted to read the lane markings at 70-plus-mph to keep the three-row SUV centered and in its lane consistently.

Like GM’s Super Cruise system, Lincoln Activeglide isn’t meant to work in construction zones. Though, unlike the GM system it doesn’t seem to actually know where active construction zones are. No alerts pop up, and the system didn’t disengage itself immediately. I manually turned it off for safety reasons. 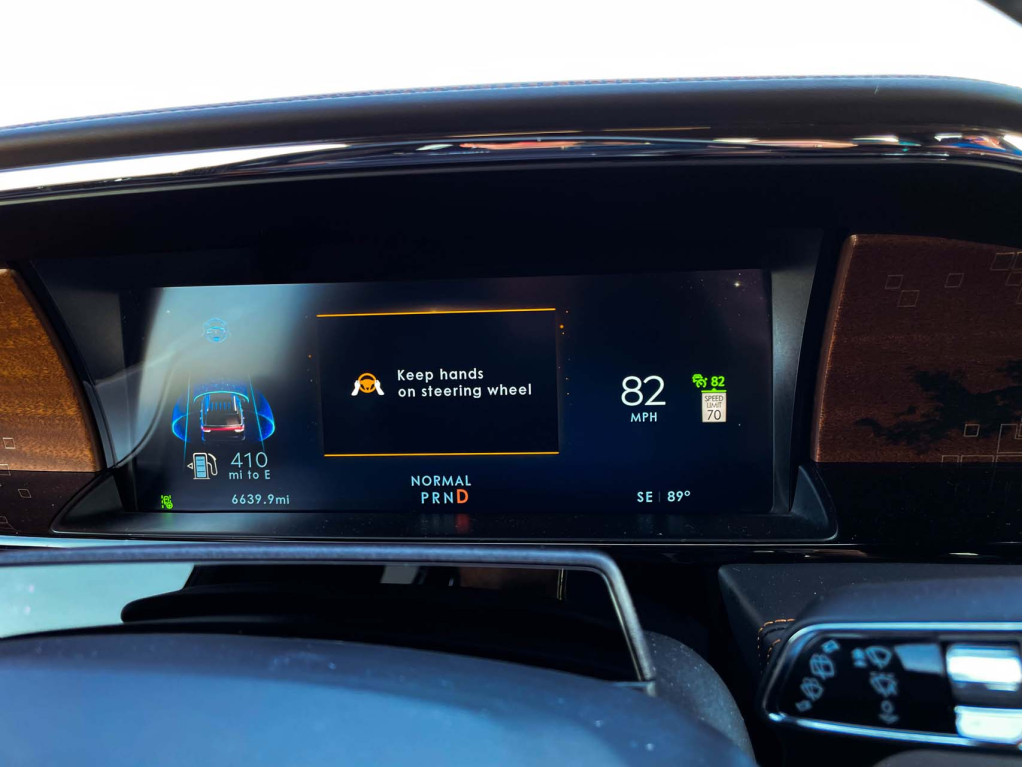 Speeding is allowed with Activeglide, but I was told the system shuts off at over 80 mph. I was able to get the system working at 81 mph, but only twice despite my best efforts. It wouldn’t work at 82 mph. Super Cruise will go to 85 mph and even maintain steering duties, though it hands back control of the throttle and brake, up to 92 mph.

It also won’t work in tunnels. While GM’s Super Cruise system works in tunnels thanks to some fancy use of old-school technology Lincoln’s system says no. It will hand control back to the driver based upon map data and vehicle sensors readings upon entering the tunnel, though it will offer to take back control upon exiting the tunnel.

Currently the system will not execute a lane change automatically, but that functionality is “coming very soon” according to Billman. Super Cruise gained this feature earlier in the year. 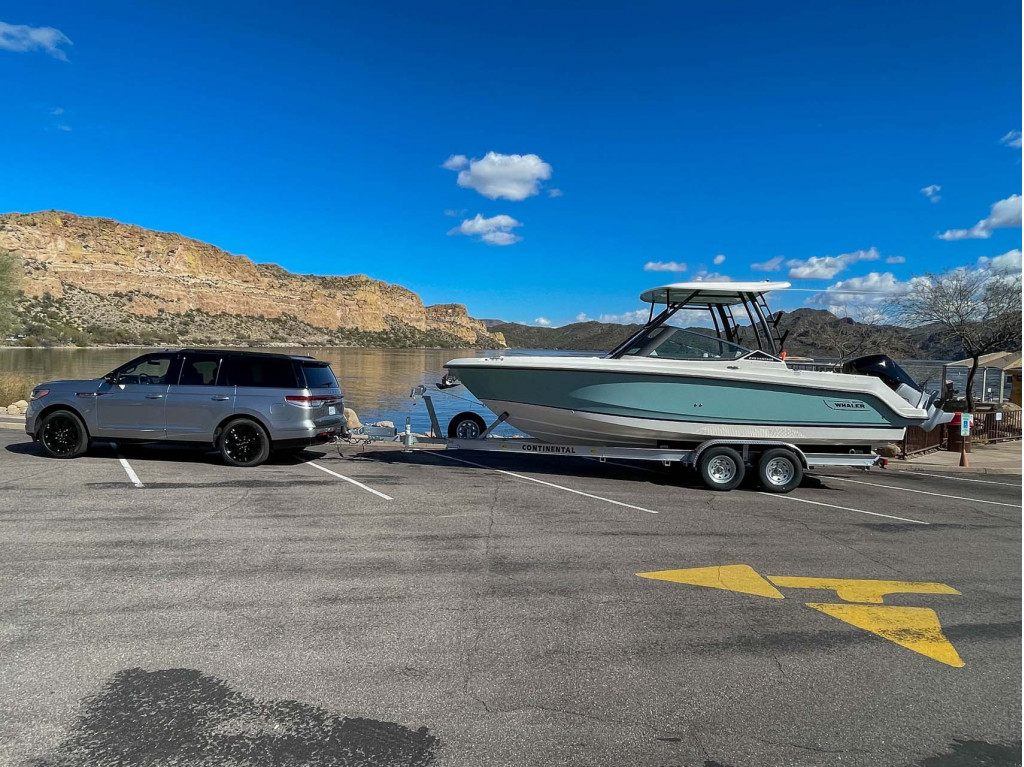 Towing won’t work either, a new feature GM’s enabled with its system as it moves from cars into trucks. Lincoln’s system says no. Once a trailer’s hooked up and plugged into the Navigator, Activeglide is disabled and won’t come back online until the trailer’s unhooked from the vehicle. Billman wouldn’t comment on whether hands-free towing will come with a future update to Activeglide.

When Activeglide works it’s good. But the system falls short of greatness.

A key difference between Activeglide and its crosstown rival Super Cruise is how smooth the GM system is and how far out it’s reading the situation.

Activeglide can’t seem to pick a virtual center line and keep the vehicle on it 100% of the time. There’s slight sway back and forth with the steering wheel making constant corrections even when on a straight road.

The system also doesn’t seem to sense traffic building ahead as quickly as Super Cruise, nor does it apply the brake and throttle as smoothly in stop-and-go traffic. The latter was confirmed multiple times by my wife and daughter who are subject to motion sickness and consistently inform me (loudly) about when active safety systems aren’t acting in a smooth manner.

All of these issues stem from the Navigator trying to process a lot of its surroundings in real time while heavily relying on the camera systems. The throttle and braking issues could be corrected with an updated calibration should Lincoln choose in the future. 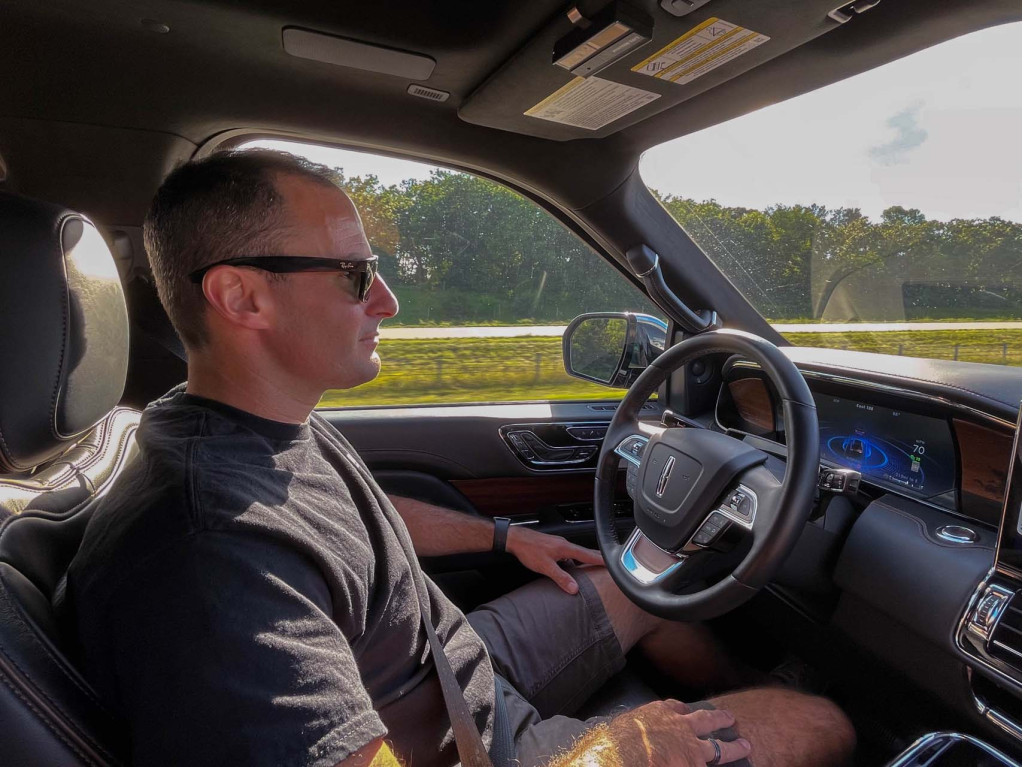 Stuck in the attention loop

The attention monitor’s short leash of a consistent 4.0 seconds makes it one of the most vigilant on the market in terms of ensuring the driver is paying attention to the road. The infrared cameras were able to read my eyes through polarized Ray-Ban sunglasses in most situations while cruising endlessly hands-free, until the sun began to set and the system started having issues detecting my eyes through my sunglasses. 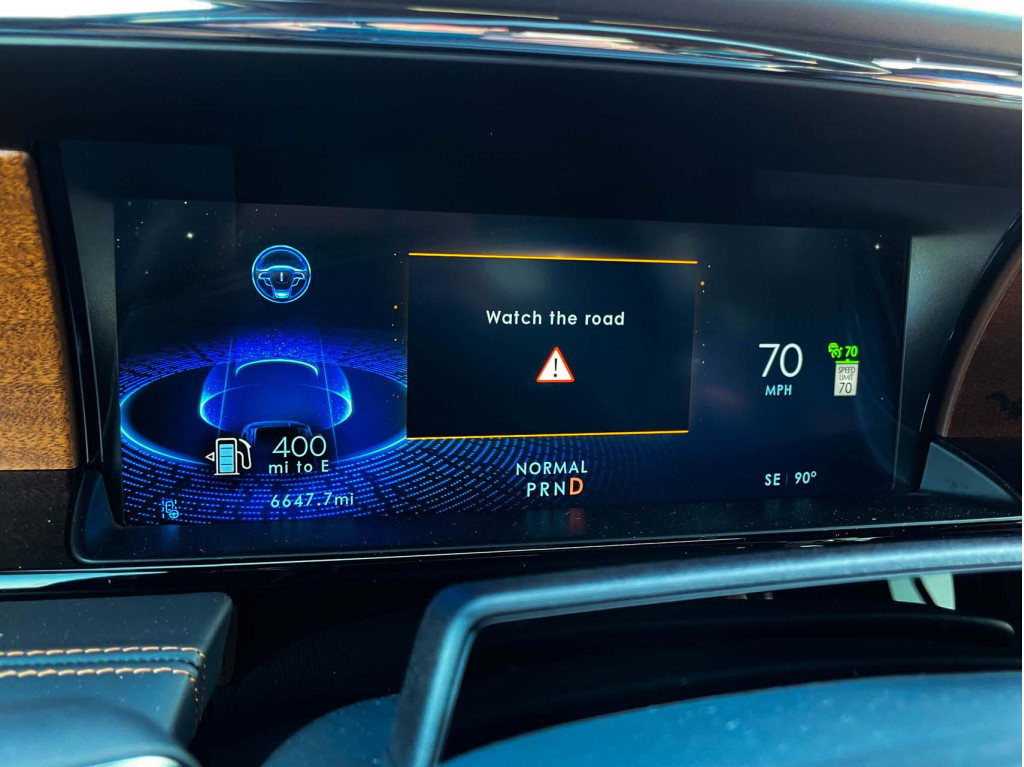 At the time it seemed like the angle of the sun mixed with the reflection of the light on my sunglasses caused an issue for the camera system to see my eyes. Billman later told me that it’s human nature to unknowingly start to squint as direct sunlight at certain angles hits the eye regardless of sunglasses. The body partially shuts the eyelids to protect the eyes from the sun, and when this takes place the camera can’t see your eyes. Then the kickdown within the system begins. 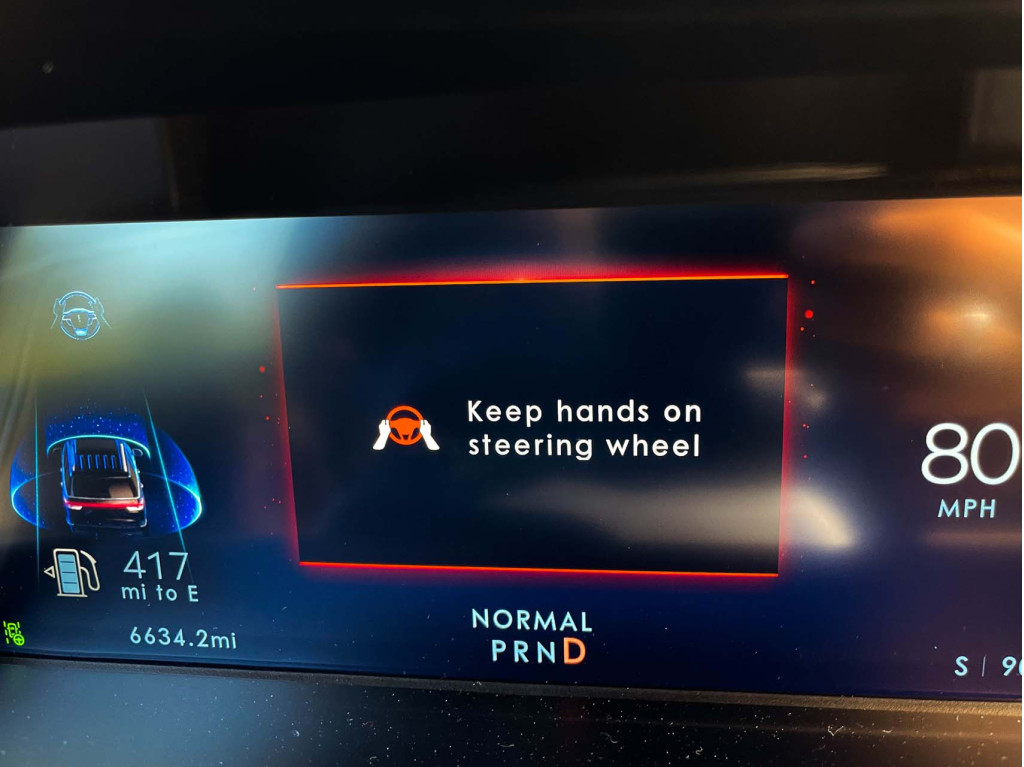 After waiting a few moments I reengaged the system, but minutes later this entire process started again. I gave up as our exit from the mapped highway was only a few miles away. We had made it most of the way.

Billman told me that had the escalation continued the system would have completely stopped the Navigator on the highway, but in its current state it wouldn’t turn on the hazard lights or call 911. 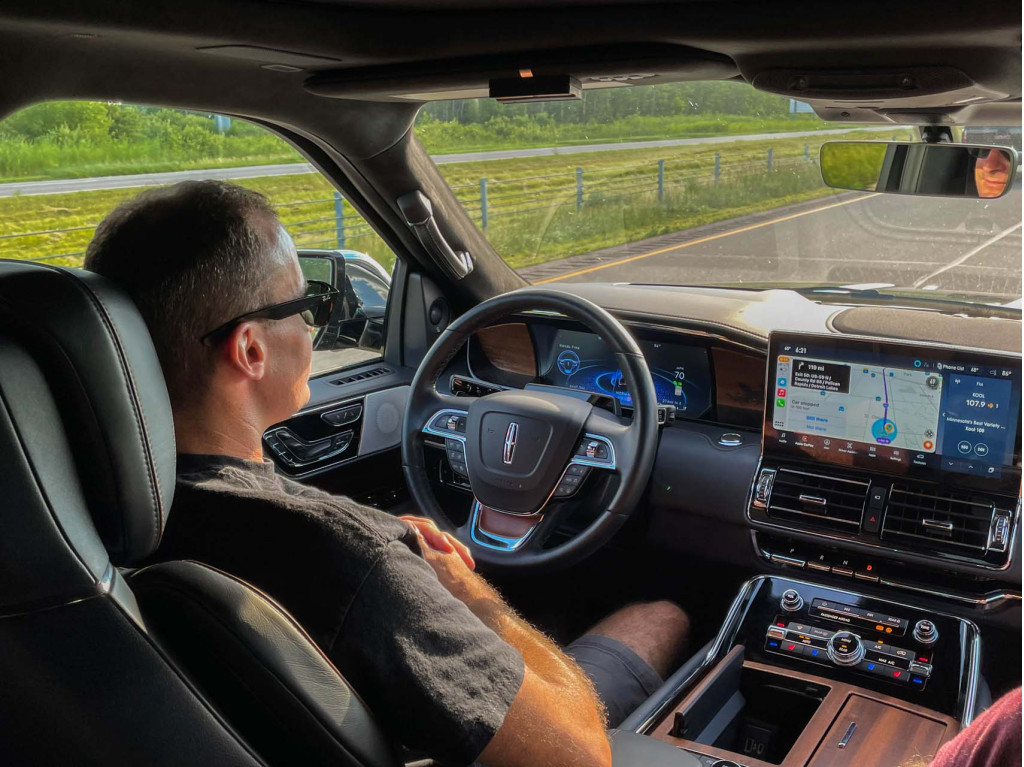 Activeglide is only the second truly hands-free driver-assist system on sale in the U.S. that works at highway speeds. It’s good, and fully capable under the right conditions of going for long periods of time without the driver needing to take over the steering wheel. The system’s at its best in the middle of nowhere on the open road.

But there are so many conditions it simply isn’t prepared for yet, like certain curves, tunnels, while towing, and simply the ability to know precisely where the vehicle is in regards to its surroundings on the road.

While Activeglide’s a full step behind GM’s fantastic Super Cruise system in the Escalade, it’s providing a glimpse into the serene future that will enable hands-free driving down the road in a leather-lined luxury liner where fast food can be eaten with both hands, at full speed.

Mitsubishi Ralliart returns to US in 2023

Wed Aug 31 , 2022
The Mitsubishi Ralliart performance division will return to the United States in 2023, Mitsubishi confirmed Wednesday in a press release. The automaker said it will launch limited-edition Ralliart versions of each of its models—including the Outlander, Outlander PHEV, Eclipse Cross, Outlander Sport, and Mirage—but it appears the changes for these […]